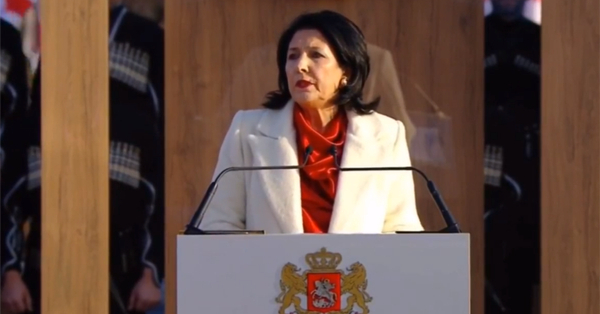 The inauguration ceremony, broadcast by several TV channels, was held in Batonis-Tsikhe, the residence of King Heraclius II (1720-1798).

“I, the president of Georgia, declare before the Lord and the people, that I will honor the constitution, the country’s independence, its unity and integrity, and faithfully fulfill the duties of the president and take care about the security of citizens and their welfare, and the revival and glory of my people and the motherland,” said Zurabishvili.

The new Georgian leader vowed to continue policy towards integration into NATO and the European Union, saying that this is the people’s will. “As the Georgian president backed by our strategic partner, the United States, and European friends, I will make every effort to promote our country’s integration process into NATO and the EU,” she stressed.

Some 1,800 local and foreign guests, including delegations from 55 countries and representatives of the opposition and clergy, attended the ceremony. Former French President Nicolas Sarkozy represented France.