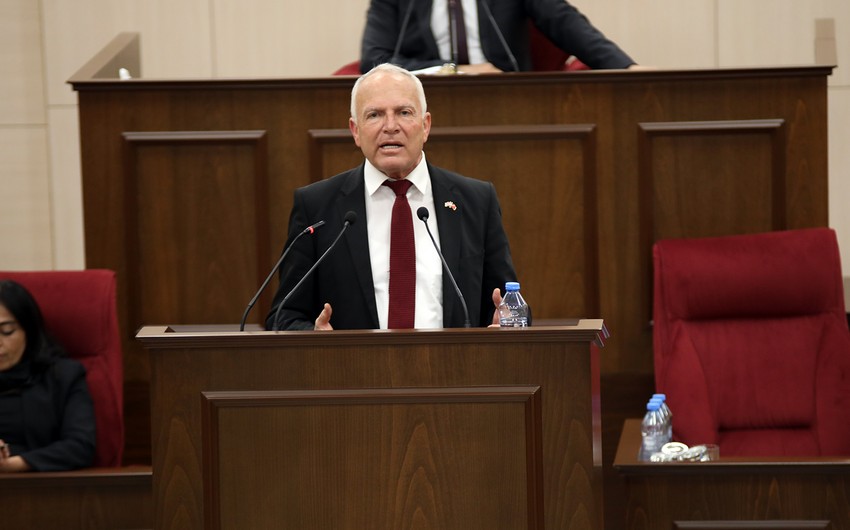 “The Azerbaijani army planted the tricolor flag in the lands liberated from occupation at the cost of heroes’ lives.”

According to him, the people of Northern Cyprus know the Azerbaijan citizens as brothers: “Azerbaijan is our soul, the continuation of our nation in the South Caucasus. We are also a part of the Turkish people in the eastern Mediterranean. Azerbaijan’s joy, sorrow, is our sorrow and destiny. So, we were deeply saddened by the Nagorno-Karabakh region’s occupation, the ancient lands of Azerbaijan, by Armenia.

We believed that one day Azerbaijan would liberate Nagorno-Karabakh from the Armenian occupation. We were sure that the Azerbaijani Army would solve this problem. In fact, the OSCE, the UN, Russia, the United States, and France did not want this issue to be resolved. By prolonging the settlement of the problem, they created conditions for Armenians’ complete settlement in those territories. Therefore, it was a big mistake to wait and waste time relying on these international organizations. As Mohammad Amin Rasulzadeh said, “Once the flag is raised, it will never come down again!” Hopefully, the glorious flag raised by the Azerbaijani Army in Karabakh with pride and determination will never fall again and wave forever. “

Töre said that all Turks of Northern Cyprus were closely following the Patriotic War and were excited by the news from the front: “Azerbaijani flags were hung in many houses here. I also swang the Azerbaijani flag in my house. There were speeches on Azerbaijan in the Parliament of Northern Cyprus. We also proudly shared this victory of Azerbaijan on the battlefield and in diplomacy. Our President and our political parties made statements on this issue.