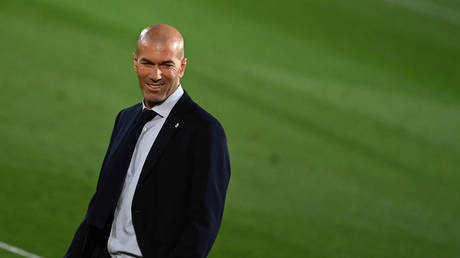 Real Madrid manager Zinedine Zidane reportedly has just two games to save his job at the club with Barcelona looming in El Clasico on Saturday.

French outlet L’Equipe reported as much after Los Blancos lost back-to-back home games in the run-up to Saturday’s showdown at the Camp Nou, after which Real face Borussia Monchengladbach in the UEFA Champions League on Tuesday.

Zidane finds himself under pressure after his side were beaten 1-0 by Cadiz last weekend – a scoreline which could have been much less narrow on another day – and lost 3-2 to Shakhtar Donetsk in the Champions League on Wednesday.

To make matters worse for Real in the latter game, the Ukrainian side – who were 3-0 up by halftime – were missing 13 first-team players after 19 positive coronavirus cases within the club.

It all makes for far-from-ideal preparation for Saturday’s clash with Barcelona, against whom Los Blancos have won just one and lost four of their last eight meetings.

Barcelona also lost their last match in La Liga as they slipped to a 1-0 defeat at Getafe, but they bounced back with a 5-1 win over Ferencvaros in Europe on Tuesday.

Despite being a far-from-vintage edition of the Catalan giants, they’ve played better football and looked more convincing than Madrid in the early weeks of the season.

Real have scored eight goals in six matches in all competitions, while Barca have notched 13 in five. At the other end, Real have shipped six, and Barcelona three.

Barcelona will feel they’ve got an ace up their sleeve, too, in the form of who else but Lionel Messi. After all, the Argentinian has 26 goals – the all-time record – and 14 assists in El Clasico.

However, Real needn’t be without hope for Saturday’s game.

While their recent record in El Clasico hasn’t been particularly inspiring – and has allowed Barcelona to catch up to 96 head-to-head wins apiece in competitive matches – Real did have the edge in their meetings last season.

Zidane’s men held Barca to a 0-0 draw at the Camp Nou before beating them 2-0 at the Santiago Bernabeu, making the campaign the first since the 2012-13 season that the Blaugrana have not won at least one of their league meetings.

What’s more, Messi hasn’t fared that well against them recently, having failed to score or assist in his last five appearances against them.

The 33-year-old hasn’t found the net from open play yet in this campaign either.

Real will be hoping that dry spell continues, while for Barcelona it would be the perfect time for it to come to an end. (RT)

President Ilham Aliyev presented the Holy Quran he brought from Mecca to the Aghdam mosque,…