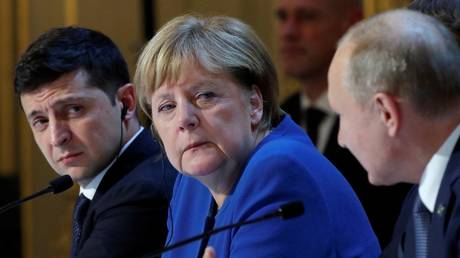 FILE PHOTO: Ukraine's President Vladimir Zelensky and German Chancellor Angela Merkel listen to Russia's President Vladimir Putin as they attend a press conference after a summit on Ukraine at the Elysee Palace, in Paris, on December 9, 2019. © AFP / CHARLES PLATIAU;  POOL

The Ukrainian president, like the leaders of the EU, believes that the Russian leader’s nuclear warning should be taken seriously FILE PHOTO: Ukraine’s President Vladimir Zelensky and German Chancellor Angela Merkel listen to Russia’s President Vladimir Putin as they attend a press conference after a summit on Ukraine at the Elysee Palace, in Paris, on December 9, 2019. © AFP / CHARLES PLATIAU; POOL

“Look, maybe yesterday it was a bluff,” Zelensky told CBS host Margaret Brennan. “Now, it could be a reality.”

Putin himself said on Wednesday that he was “not bluffing” when he warned that Russia would consider defending its land with “various weapons of destruction.” That land could soon include the Donetsk and Lugansk People’s Republics, as well as the regions of Zaporozhye and Kherson, where referendums are currently being held on joining the Russian Federation.

Western leaders are taking Putin at his word. “When people say it is not a bluff, you have to take them seriously,” the EU’s top diplomat, Josep Borrell, said on Saturday. US National Security Adviser Jake Sullivan told CBS earlier on Sunday that Washington has told Moscow that “any use of nuclear weapons will be met with catastrophic consequences for Russia.”‘ 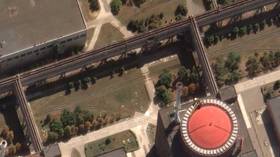 US threatens Russia with ‘catastrophic consequences’

Despite Russia’s recent mobilization of 300,000 more troops and the likelihood of four new territories falling under Russia’s nuclear protection in the near future, Zelensky insisted that Putin “knows that he’s losing the war.” Nevertheless, the Ukrainian president told CBS that his government needs billions more dollars, more weapons, and more sanctions on Russia to continue the fight.

“We need to keep putting pressure on him and not allow him to continue,” he said, referring to Putin. (RT)