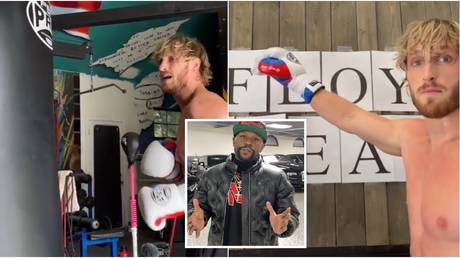 YouTube star Logan Paul says that the boxing icon Floyd Mayweather hasn’t signed a contract to fight him yet because he doesn’t know how to spell his own name, as rumors swirl of a forthcoming fight with the ring legend.

Paul, 25, the occasional boxer and full-time internet prankster, has been positioning himself for what would be a highly-lucrative fight with the undefeated five-weight world champion Mayweather and has turned up the heat on his rival with a new social media video.

In the brief clip, Paul is seen hitting a heavy bag and firing insults at the legendary boxer as he attempts to explain why Mayweather hasn’t yet agreed to a deal.

“Hey Floyd, I know you’ve had the contract for a while now,” Paul says. “At first I thought you didn’t sign it because you didn’t want one punch to ruin your legacy.

“But now I feel like maybe you didn’t sign it because you don’t know how to spell your name.”

“Don’t worry, champ, I’ve got you – check this out. I made you a cheat sheet,” he added, revealing printouts of Mayweather’s name displayed on a wall.

“This is your name. Floyd Mayweather. It’s pretty simple – it starts with an F.

These are obviously strong words from Logan Paul, a man who has yet to register a win in a boxing ring after first drawing and then losing to fellow YouTuber KSI in two high-profile but low-quality matches in the last two years.

That 2019 defeat, though, showed that while Paul is a novice in the ring, his ability to persuade a generation of YouTube viewers to part with their cash to watch him remains undamaged – something noted by boxing promoter Eddie Hearn, who hitched his trailer to last year’s fight and was rewarded, he says, with 1.2 million global pay-per-view buys.

Mayweather, too, has been vocal recently about his own return to action, announcing last week that he will compete in Japan early next year – though the specifics of this have yet to be revealed. He has fought just twice in recent years, defeating Conor McGregor in August 2017 in what was the American’s final career fight and then again on New Year’s Eve in 2018 when he scythed through the overmatched Japanese kickboxer Tenshin Nasukawa inside one round.

And Mayweather says that Logan Paul could be in for the same type of treatment that Nasukawa received, telling fans that he won’t go easy on the Internet star.

“These YouTube girls better find some Barbie dolls to play with cause I’m not the one for the kid games,” Mayweather said.

“Three years ago a fighter from the UFC said my name and I had to put a muzzle on that b*tch. Logan Paul can get the same treatment before I go conquer Japan again.”

Paul is clearly attempting to talk himself into a fight with one of the greatest boxers to ever set foot into a ring and while it will no doubt be of great benefit to the bank balance of all involved, we suspect Paul’s face after the fight may just tell a different story. (RT)