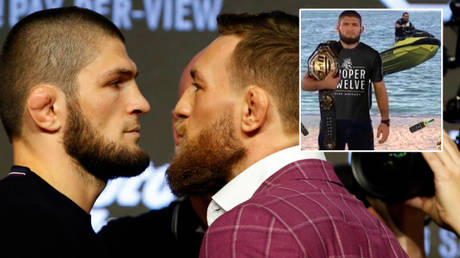 Former UFC champ Conor McGregor has been criticized for producing a crass image of old rival Khabib Nurmagomedov wearing a t-shirt promoting his whiskey brand – hours after calling a list of the Russian’s achievements “garbage”.

Provocative former featherweight and lightweight champion McGregor was accused of religious insensitivity after portraying former foe Nurmagomedov, who is a devout Muslim and does not drink alcohol, wearing a top bearing the name of the Irishman’s whiskey line.

The 32-year-old, who lost to Nurmagomedov in 2018 and is preparing for a rematch with Dustin Poirier, included himself on a speedboat in the background of the photoshopped image from last week’s press call in Abu Dhabi.

Also on rt.com ‘That just shows what kind of lowlife he is’: Khabib responds to McGregor’s ‘insults’

“You know Khabib is Muslim?” wrote an unimpressed fan in response to McGregor’s tasteless taunt.

“Are you really going to be that salty and immature by putting your alcohol brand t-shirt on him? Says a lot about your insensitivity.”

McGregor has frequently been accused of Islamophobia towards Nurmagomedov in the past, not least when the unbeaten Dagestani refused to accept whiskey from him at a press conference in the build-up to their fight, leading to McGregor labeling him a “backward c***”.

He has called Nurmagomedov’s manager, Ali Abdelaziz, a terrorist, described the fighter as a “Dagestani rat”, posted a photo of himself with the caption “chilling in Jahanum” – the Islamic term for hell – and branded Nurmagomedov’s wife “a towel”.

Nurmagomedov was praised for his restraint ahead of his win over McGregor, although his opponent’s inciteful comments were felt by many to have fueled the ugly post-fight scenes that featured the victor jumping into the crowd.

“Notorious” appeared to show respect towards Nurmagomedov after his impressive second-round win over Gaethje at UFC 254, acknowledging his “good performance” and offering “respect and condolences” for the loss of his father, Abdulmanap, in July.

Less than a day before posting the bizarre edited image on Instagram, McGregor slammed a journalist’s selection of Nurmagomedov’s achievements as a “garbage list full of overstretched accomplishments.”

Criticizing the “rushed work”, McGregor argued that former titleholder Oleg Taktarov should be included alongside Nurmagomedov and Petr Yan on a list of Russian-born UFC champions, although Taktarov did not compete in the modern form of the competition.

McGregor, who last fought when he beat Donald Cerrone in January, was called out by critics, some of whom suggested he was a coward.

“You talk sh*t when [Nurmagomedov] retires because you know what the deal is,” said one. (RT)