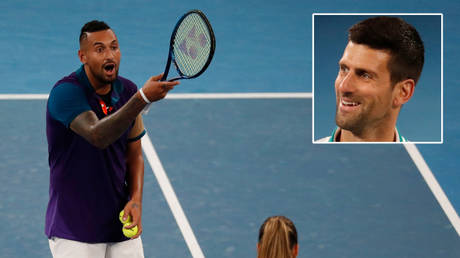 Nick Kyrgios has tested fans’ patience by failing to resist insulting Novak Djokovic yet again within seconds of professing his “respect” for the world number one, hitting out before exiting his home Australian Open tournament.

Jocular Kyrgios entered the Margaret Court Arena by imitating Djokovic’s “heart-throwing” gesture to the stands alongside partner Thanasi Kokkinakis, attempting to imbue some light-heartedness among the sad sight of the empty stands.

The world number 47 was unable to conceal his thinly-veiled contempt for the Serb superstar, though, as he made a sarcastic dig at Djokovic’s salute before verbally expressing his disdain.

“Just feeling the love,” the 25-year-old drily explained of his take on the trademark.

Nick #Kyrgios: “We’re just having some fun. #Novak, I’m sure, doesn’t like me and we both have respect for each other, but I don’t like him at all, so it’s fun.”Mate, he had to spell it for you that he doesn’t have respect for you.WHAT respect?!#AusOpen

‘I don’t like him at all’ – you in kindergarten mate? 🤡 Thank goodness he has lost the dubs too… he had to get in as many last-minute dogs in before being booted out of Melbourne

Read more:   Qatar now so hot it has started air-conditioning the outdoors

Kyrgios then contradicted himself within the space of a sentence by adding: “We’re just having some fun. Novak, I’m sure, doesn’t like me and we both have respect for each other, but I don’t like him at all, so it’s fun.”

Among various barbs aimed at Djokovic since his ill-fated Adria Tour event last year, Kyrgios has called the long-standing target of his venom “boneheaded”, questioned his leadership skills and, most recently, labeled him a “tool” over the row that surrounded his attempts to discuss player welfare with tournament organizers.

It’s never “banter” when the person on receiving end simply does not want it or interested in engaging back.. it’s BULLYING. Disgraceful all those enabling him and egging @NickKyrgios on. A reminder Nick celebrated winning a R2 match as if he had just won a calendar grand slam.🤔 https://t.co/3KRSHmTAGv

When pressed by reporters for a response last week, Djokovic briefly admitted that he did not fully respect Kyrgios before drawing his comments to a concise close.

Viewers evidently felt the fatigue after Kyrgios’s umpteenth blast at the man who faces Alex Zverev in the quarterfinals on Tuesday.

“This is what happens when one needs to lower themselves, when they have nothing else to talk about,” said one.

Kyrgios should be reprimanded by ATP at the least

And to think you used to be a Krygios fan 😱 I can’t help myself, I love watching him play and his matches always have some sort of drama … BUT I have to say this is a bit OTT

“He and the Australian media decide it’s more entertaining to focus on insulting Djokovic. Disappointing, to say the least.”

Another pointed out: “It’s never ‘banter’ when the person on the receiving end simply does not want it or is not interested in engaging back.

“It’s bullying. Disgraceful from all those enabling him and egging [Kyrgios] on.”

It’s obsessive at this point, it’s just bizarre. If he had anyone in his own life looking out for him they’d have a word. I’ve said this for years now about his antics on court though. It just goes to show how uninteresting his own life is to constantly focus in on someone else.

“He’s seriously not all there,” claimed one Kyrgios critic. “It’s almost time for a restraining order – that’s how sick his obsession with [Djokovic] is.”

Australian double-act Kyrgios and Kokkinakis had little to laugh about in terms of their result, losing in straight sets to fourth seeds Wesley Koolhof and Lukasz Kubot in a match in which Kyrgios was punished for a time violation.

Kyrgios had also appeared to take umbrage at tennis legend Martina Navratilova describing him as a “good bad guy” and a “bad good guy” before his defeat to Thiem, replying in capital letters on Twitter: “You know nothing about me.”