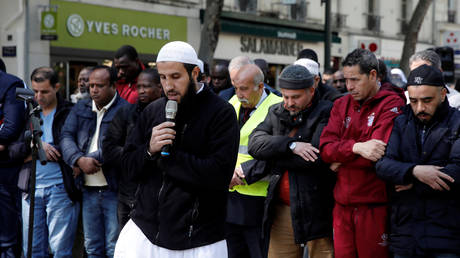 FILE PHOTO: Muslims pray during Friday prayers in the street in front of the city hall of Clichy, near Paris, France, April 21, 2017, after an unauthorised place of worship was closed by local authorities. ©  REUTERS/Benoit Tessier

Muslims in France have been told they are “not persecuted,” after Turkish President Recep Tayyip Erdogan blasted French President Emmanuel Macron over his “problem with Islam.”

The French Council of the Muslim Faith (CFCM) sought to remind Muslims of their freedom in France, as it urged them to “defend the interest” of the country, amid a boycott campaign by Turkey.

It follows Erdogan’s call on Monday for Turks “never” to buy French products, in response to Macron’s toughened stance on radical Islam in the wake of a French teacher’s murder.

The French president had warned that the country would not “not give up the cartoons” and said “radical Islamists” were “stealing our future” as he mourned the death of teacher Samuel Paty who was beheaded outside Paris on October 16 by 18-year-old Abdullakh Anzorov. (RT)

Argentines will formally bid farewell on Thursday to one of the nation’s favorite sons, soccer…

The President’s spokesperson has told people to forget about Duterte’s jokes, which were described as…