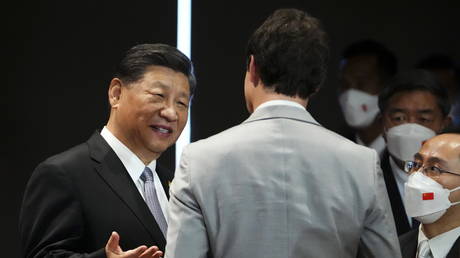 Chinese President Xi Jinping has publicly dressed down Canadian Prime Minister Justin Trudeau for leaking the content of their meeting to the media. Canadian reporters captured the exchange on video during the G20 summit in Bali, Indonesia on Wednesday.

Barely a minute long, the exchange opens with Xi, speaking through a translator, telling Trudeau that “everything we discussed has been leaked to the papers.”

“That is not appropriate. And that’s not the way the conversation was conducted,” Xi added. “If there was sincerity on your part…”

“In Canada we believe in free and open and frank dialogue, and that is what we’ll continue to have,” Trudeau replied, speaking over the translator still trying to finish relaying Xi’s words.

“We’ll continue to look to work constructively together but there will be things we will disagree on,” the Canadian leader added.

“Let’s create the conditions [for that] first,” replied Xi, offering Trudeau a handshake. While the Chinese leader smiled and moved on, the Canadian PM walked away from the camera, by himself.

The Cdn Pool cam captured a tough talk between Chinese President Xi & PM Trudeau at the G20 today. In it, Xi express his displeasure that everything discussed yesterday “has been leaked to the paper(s), that’s not appropriate… & that’s not the way the conversation was conducted” pic.twitter.com/Hres3vwf4Q

What Reuters described as “a rare display of public annoyance” by Xi follows media reports about the contents of his meeting with Trudeau on Tuesday.

In the course of the ten-minute meeting, Trudeau raised “serious concerns” about China’s “interference activities” in Canada, ranging from industrial espionage to meddling in the 2019 federal election, a “government source” told AFP.

According to the same source, they also discussed the situation in Ukraine, North Korea, and the upcoming biodiversity conference in December, which Beijing and Ottawa are co-hosting.