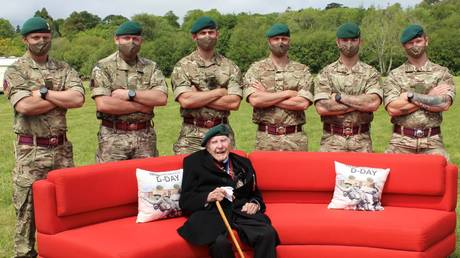 The ill-fated picture emerged on Twitter earlier this week. The photo, taken in Cornwall on the 77th anniversary of the Allied invasion of Nazi-occupied Western Europe, shows 96-year-old former Royal Engineer Harry Billinge sitting on a red sofa in the middle of the field. Six active-duty sappers from 24 Commando Royal Engineers are seen standing behind.

Sappers from @24CdoRE based in Devon paid a personal tribute to one of Britain’s few surviving D-Day veterans at a special event held in Cornwall on the 77th anniversary of the Normandy landings. Read more: https://t.co/h6mwPMIgD6#DDay77#HarryBillingepic.twitter.com/dRlyAmtad8

Having been given such a head start, the comment section was instantly flooded with assorted D-Day jokes of varying degrees of obscenity, with only a handful of users showing up to pay their respects to the veteran and thank the military for commemorating the landings anniversary.

Wow, what a nice picture. pic.twitter.com/5oRlCQHYOE

From D Day to Getting Some D Day

Some users suggested the unfortunate set-up showed the Army’s social media team was not spending enough time on the internet, or they might have predicted how the photo would be received. (RT)