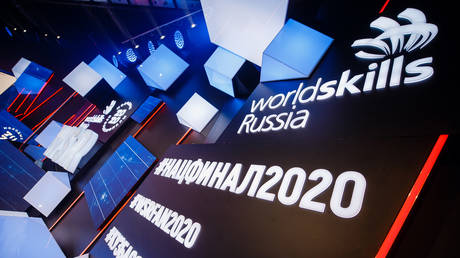 The closing ceremony of the finals of the 8th WorldSkills Russia competition has been held in Moscow.

The contest proved to be the biggest edition in the number of participants, experts and fans in Russia and around the world. Young professionals were under the watchful eye of 10,000 cameras. Moscow’s participants scooped the biggest number of votes across all the categories and competences.

Moscow has staged the closing ceremony of WorldSkills Russia 2020, a major young professionals contest, held for an eighth time. The biggest ever finals were hosted by the Siberian region of Kuzbass, becoming the innovations hub for vocational training and bringing together almost 3,000 participants, including 1,000 in the ‘junior’ categories, plus 700+ experts from all Russian regions and 78 countries, as well as 50 major partner corporations. 10,000+ cameras watched the young professionals at work – it felt like a Hollywood movie production site!

The COVID-19 pandemic proved to be a real challenge for the organizers. They defied the odds and pioneered the world’s first combined offline/online participation and assessment model, setting a new record for the highest participation figures in Russia’s and global WorldSkills history.

The ceremony kicked off with pop star Yulianna Karaulova’s performance of her top hit ‘Beyond Orbit’ and a message to the contestants: “For you, young professionals, it is time to be pioneers.” 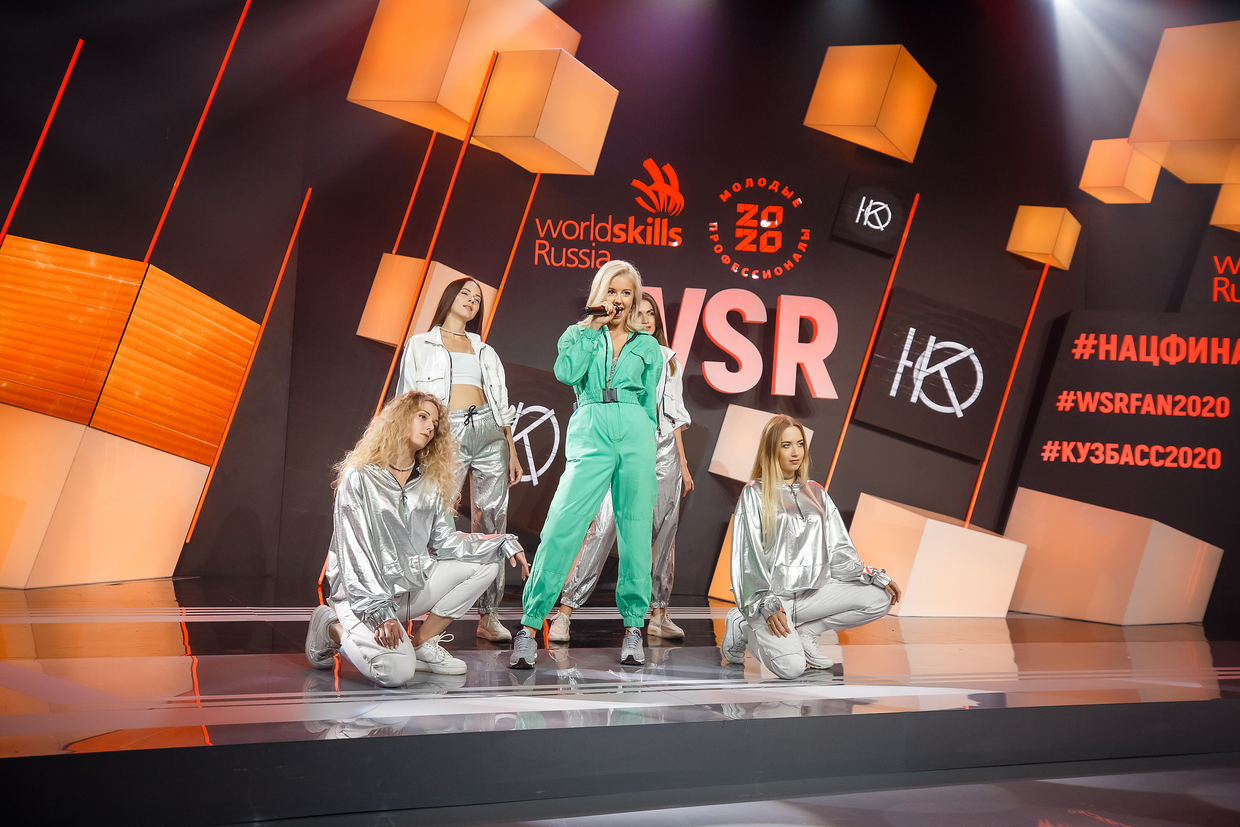 That slogan dominated the finals. And there was a reason for it: in 2020, it was Russia’s eastern region of Kuzbass that mainly hosted the competition. It is a powerful industrial area and the birthplace of the person who did the first spacewalk, Alexey Leonov. Could there be a better role model for young professionals? It is everyone’s dream to aim as high as the cosmonaut whose name went down into world history books.

The closing ceremony hosts, Rodion Gazmanov and Yana Churikova, joined the participants, their supporters, experts and top officials in opening this new page in the history of WorldSkills Russia, which proved that 2020 is the year of technology and amazing discoveries. As the presenters said, young professionals are capable of anything and while some see challenges as an obstacle in their way, others believe it’s a chance to prove themselves.

Russian President Vladimir Putin was one of the first people to address the participants. In his message, he said that the competition was a major occasion for everyone involved and young professionals proved to themselves that they can go against the best of the best and succeed.

“I’m convinced that much-needed projects like WorldSkills Russia promote vocational skills and facilitate improvements in vocational education, as well as create opportunities for young men and women to explore their creative side and grow. They also, of course, inspire respect for skilled workers,” the President’s message highlighted.

Deputy Prime Minister Tatyana Golikova also addressed the participants, saying that Russia was the first country to use a unique hybrid format, combining onsite and online participation. All in all, Golikova believes, WorldSkills Russia has its own distinctive features. The competition has become an integral part of our lives and a national priority. 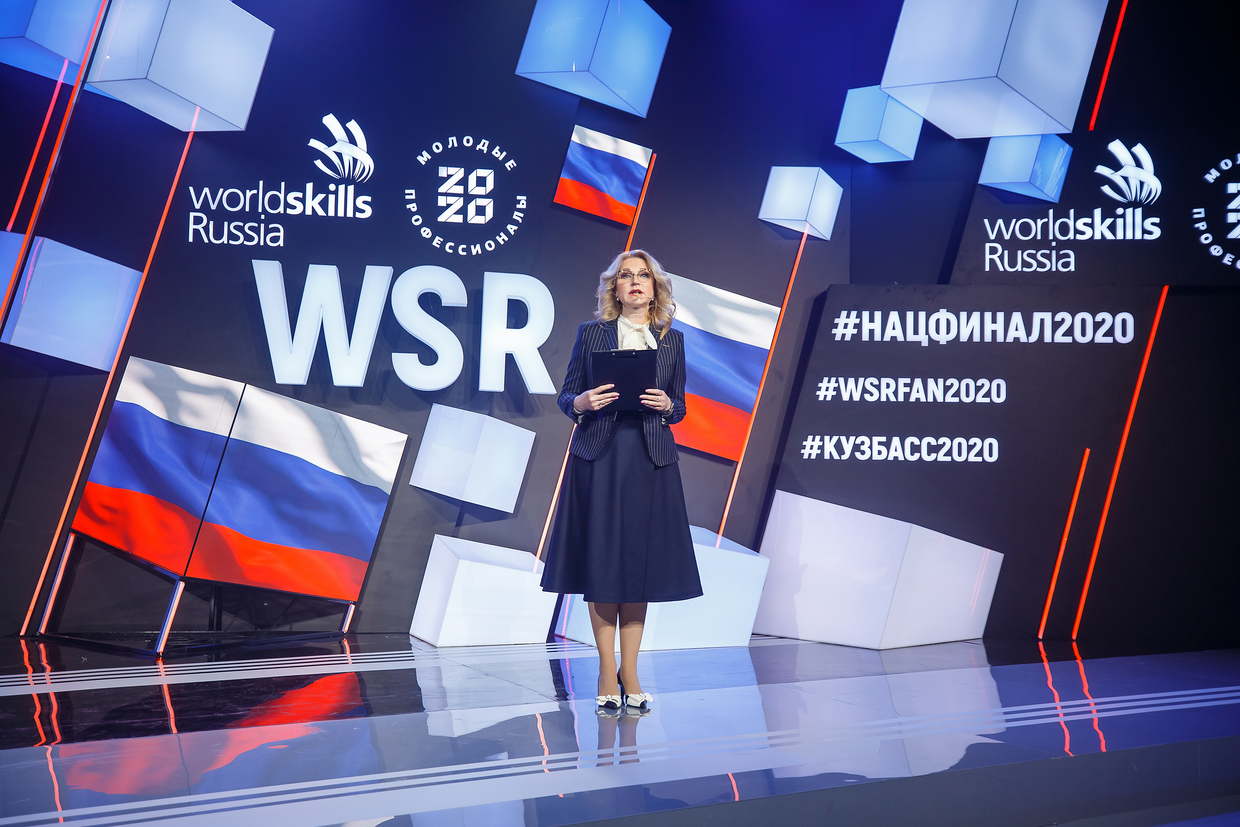 “Let me just say that back in 2017, there were 963,000 young men and women entering vocational schools and this school year, 2020/21, we expect there to be 1.2 million applicants. The WorldSkills movement played a role in that,” Golikova pointed out.

“We will be focusing on developing a system in Kuzbass to cultivate future construction professionals for Siberia and the Far East. There’s definitely a shortage of highly trained specialists, and that’s the reason why we established the Kuzbass Construction College. Further on, we will be tasked with constructing the Eastern part of the Baikal–Amur Mainline and the Trans–Siberian Railway, so we are going to need the industry’s best,” Tsivilyov said.

Sergey Tsivilyov invited everyone to visit Kuzbass next year to celebrate the 300th anniversary of the region. Among the highlights of the competition, the governor especially emphasized the fact that all the participants, fans and experts had become friends and forged a team of true professionals.

The competition of aspiring professionals also had some rather unique audience – Ivan Vagner and Anatoly Ivanishin, currently stationed aboard the International Space Station (ISS), extended their congratulations to the finalists of WorldSkills Russia from space.

“Let nothing stop you from achieving your dreams. Remember one thing: You can do a lot alone, but any brave endeavor, for instance, a space mission, is always the result of teamwork. Together, you can do the impossible. Learn, dream, dare,” encouraged Vagner.

We have our winners

This year, there were 130 skills for young professionals and 71 for juniors. The assessment system was divided into several stages. Experts would assess competitors’ work in their home regions and remotely, via video streaming. What couldn’t be evaluated remotely, was sent by express delivery to the main competition management center in Novokuznetsk or to subsidiary centers in Moscow and Kazan.