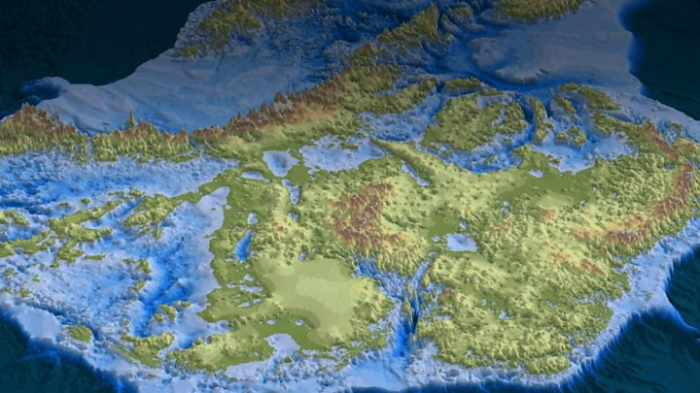 Scientists have discovered the world’s deepest land canyon thousands of feet below an Antarctic glacier.

Glaciologists led by the University of California, Irvine have unveiled what they describe as the most accurate portrait yet of the contours of the land beneath Antarctica’s ice shelf. The research was presented this week at the Fall Meeting of the American Geophysical Union in San Francisco and published in the journal Nature Geoscience.

Experts used an array of data, including information from satellites on ice flow motion, to shed new light on the land beneath Antarctica.

“Older maps suggested a shallower canyon, but that wasn’t possible; something was missing,” Mathieu Morlighem, UCI associate professor of Earth system science and the study’s lead author, said in a statement. “With conservation of mass, by combining existing radar survey and ice motion data, we know how much ice flows through the canyon – which, by our calculations, reaches 3,500 meters [11,483 feet or 2.2 miles] below sea level, the deepest point on land. Since it’s relatively narrow, it has to be deep to allow that much ice mass to reach the coast.”

For comparison, the average depth of the ocean is about 12,100 feet, or 2.3 miles, according to NOAA. The deepest part of the ocean, however, is about 36, 200 feet or 6.9 miles, at the southern end of the Mariana Trench in the Western Pacific.

As a result of the new research into Antarctica, scientists say that they will be better able to predict the effects of climate change on the continent.

Other fascinating discoveries were also revealed at the Fall Meeting of the American Geophysical Union. In a separate project, scientists announced the discovery of thousands of mysterious holes in the seabed off Big Sur, Calif.

Researchers from the Monterey Bay Aquarium Research Institute (MBARI) were surveying the deep seafloor off Big Sur when they discovered the strange holes.

The larger holes, described as pockmarks, are on average about 600 feet across and 16 feet deep. In a statement, MBARI noted that it first discovered some of the pockmarks in 1999. However, subsequent surveys by MBARI and other organizations have revealed over 5,200 pockmarks spread across 500 square miles.

Read more:   CNN's Don Lemon wants to 'do something' about white men, 'the biggest terror threat'

Thousands of smaller holes, known as micro-depressions. have been discovered. Researchers have spotted around 15,000 micro-depressions, which are, on average, 11 feet across and 3 feet deep.

For the first time, scientists have also conducted extensive mapping of the seafloor at Bikini Atoll, the remote Pacific Ocean testing site for atomic bombs between 1946 and 1954.