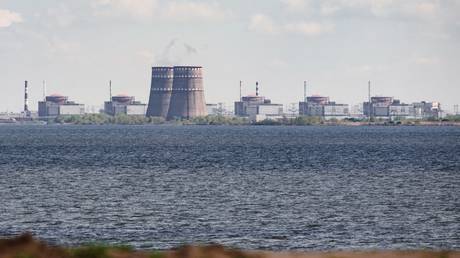 Kiev’s “reckless” actions are pushing the world ever closer to a major nuclear disaster, Russia’s ambassador to the UN, Vassily Nebenzia, told the UN Security Council at a meeting focused on the Zaporozhye power plant in southern Ukraine. The plant has been under the control of Russian forces since the start of the conflict between Moscow and Kiev and has since been shelled by Ukrainian troops on several occasions.

“We have repeatedly warned our Western colleagues that, should they fail to talk sense into the Kiev regime, it would take the most heinous and reckless steps, which would have consequences far beyond Ukraine,” Nebenzia told the Security Council on Thursday. “That is exactly what is happening,” he said, adding that the Western “sponsors” of Kiev would have to bear the responsibility for a potential nuclear catastrophe.

Kiev’s criminal attacks on the nuclear infrastructure facilities are pushing the world to the brink of a nuclear disaster that would rival a Chernobyl one.

If the Ukrainian forces continue their attacks on the power plant, a disaster can happen “at any moment,” Nebenzia warned. According to the Russian envoy to the UN, a catastrophe at the Zaporozhye power plant – the biggest one in Europe – could lead to radioactive pollution of vast swathes of territory, affecting at least eight Ukrainian regions, including its capital, Kiev, major cities like Kharkov or Odessa, and some territories of Russia and Belarus bordering Ukraine. The Lugansk and Donetsk People’s Republics, as well as Moldova, Romania, and Bulgaria are likely to suffer as well, he warned. (RT)