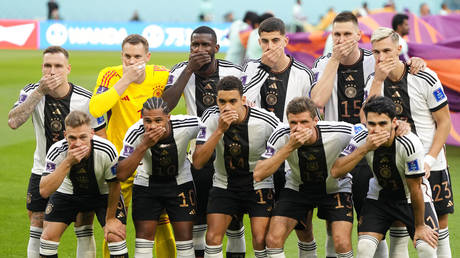 As German fans struggle to come to terms with the ‘absolute catastrophe’ of their team crashing out of its second consecutive World Cup, some are blaming the team’s focus on LGBTQ issues as a major distraction leading to defeat.

Just last month, Germany’s football powerhouse flew into Qatar on wings of glory, with its Lufthansa aircraft emblazoned with the logo ‘Diversity Wins’, setting the tone for what would become more of a hectoring lecture tour than any sporting event.

Once on Arab ground, the footballers from Team Germany continued to court dissent in their host country, Qatar, which criminalizes homosexual conduct, by attempting to wear ‘One Love’ armbands in support of gay rights. When FIFA voted down this social justice promotion, the German team had their group photo taken with their hands over their mouths as a “silent act of rebellion.”

But just as fast as they touched down in Qatar with their message of tolerance, they were already packing their bags after suffering a humiliating early defeat. They were beaten on the pitch, fair and square, not in the cultural war – but the casual observer could be excused for forgetting that the main game of the World Cup is supposed to be football, and the main job of the German (or any other) team is to kick the ball, not their hosts. Some observers, like former Russian national team coach Valery Gazzaev, even argued that the Germans lost because they were more focused on preaching than playing. 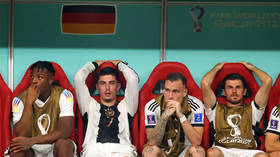 “Germany have always been on the list of favorites for major international tournaments, whether it’s the Euros or the World Cup,” Gazzaev, 68, said in a scathing interview with Championat. “To sum up, at this particular World Cup, the impression was that the German national team at the 2022 World Cup devoted more time to LGBT issues than football.”

Whether that was an actual cause for Germany’s defeat is debatable, but one thing is beyond doubt: many people were turned off by the political messaging at a sporting event. That much was demonstrated by Twitter users who couldn’t conceal their glee that the moralizing Germans were shown the door.

Meanwhile, even the Qatari announcers of the game showed their irritation with the German team by mocking them as they exited the tournament early, waving them good-bye with their hands covering their mouths.

Earlier, FIFA President Gianni Infantino also had some powerful criticism for the Western moral crusade that pulled into Qatar in light of Europe’s own peculiar history of oppression and crimes, particularly involving colonialism.

“What we Europeans have been doing for the last 3,000 years, we should be apologizing for the next 3,000 years before starting to give moral lessons,” Infantino said, amid the gasps of his Western listeners. “Reform and change takes time. It took hundreds of years in our countries in Europe. It takes time everywhere, the only way to get results is by engaging … not by shouting.”

German football appears to be just the latest in a string of defeats for the social justice warriors, whose message does not resonate with many people. And not necessarily because people are intolerant of alternative lifestyles, but because they simply resent being lectured to at every turn. Many people attend sporting events precisely because they want to escape the world of politics, not be immersed in it. This is something that many large corporations, including Hollywood, are only beginning to understand. 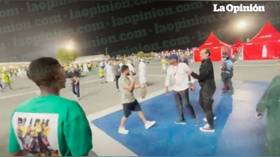 Consider, for example, Virgin Airlines. In September, the company announced a new gender-neutral policy that allows flight attendants and pilots to wear the uniform of their choosing “no matter their gender, gender identity, or gender expression.” This triggered backlash, with accusations of hollow virtue signaling and vows to boycott the airline. Coincidentally, Virgin suspended the policy for the flight that took the England team to Qatar.

Gillette and Coca-Cola are another two international brands that alienated customers with their preaching on contentious issues. Gillette, instead of focusing on selling razor blades and shaving cream, decided to insult a wide swath of its market audience by accusing males of ‘toxic masculinity.’ Sprite, the fizzy drink, meanwhile, promoted the transgender movement in an advert where a mother is seen binding the breasts of her daughter so as to make her appear more boyish, while another doting mother helps her son put on makeup before he goes out to meet his boyfriend.

Clearly, it is not just the fiercely traditional residents of Qatar who are turned off by these gratuitous lessons on wokeness. Many people in the West also have an extremely mixed feeling about them, and do not want their children exposed to the controversial messaging – especially of a sexual nature – on a daily basis.

What is the moral of the story? Qataris and Westerners have more in common than we may first realize? Nobody likes to be preached to, especially from people who lack the proper moral authority? Companies, organizations and the world of sport should stick to doing what they do best, and leave the moralizing to preachers and street corner prophets? I’m guessing “all of the above.”

09:26 WSJ: Ski resorts in Alps may close due to lack of snow

09:13 Envoy: Brazil stands in solidarity with people of Azerbaijan