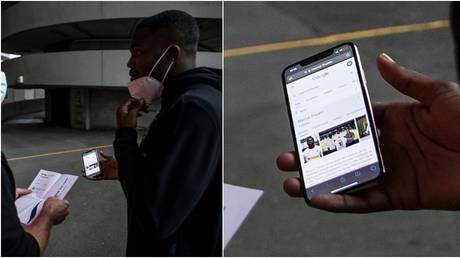 Marcus Thuram reportedly had to use Google to prove his identity. © Twitter @borussia_en.

Marcus Thuram was forced to search for himself on Google and show security staff who he was on his phone after seeming to forget his ID ahead of a Champions League match, bringing up his photo before a press call at Inter Milan.

Borussia Monchengladbach forward Thuram, who is the son of former France World Cup and EURO 2000 winner Lilian Thuram, was pictured holding his phone up to an employee in a car park in the build-up to the group game.

A close-up of the screen, which was shared by the German side before later being deleted, showed that he had typed his name into Google, revealing photos of himself signing for Gladbach and posing for an official team photo.

Security has been tightened around team travel and stadiums during the coronavirus pandemic, with group numbers and access to venues restricted in a bid by authorities to prevent the possible spread of Covid-19.

Marcus Thuram Googled himself to try to get past security 😂(via @borussia_en) pic.twitter.com/yzWFdxeQTO

Thuram had lowered his mask in what looked like an attempt to explain himself to the official, who was wearing a luminous jacket with the word “emergency” visible on the back and had a Champions League lanyard around their neck.

The midtable Bundesliga side initially joked that Thuram had been forced to carry out the digital search after the personnel member had asked: “Do you have any personal identification?”

Despite not being an instantly recognisable face on the world stage, the 23-year-old has appeared for France at every level except the senior national side and cost $14 million when Gladbach bought him from French club Guingamp in July 2019.

The 6ft 4in prospect has since scored 11 times in 34 appearances and won the Bundesliga Rookie of the Month three times.

Italian sport daily the Corriere dello Sport reported that the farcical incident had taken place while Thuram was trying to enter the San Siro, where the game will take place on Wednesday, for a pre-match press conference the previous day.

Speaking at the press call, the player who lived in Italy for nine years said: “For me, a dream is coming true.

“As a child you always dream of playing in such a big stadium. No matter where, it will definitely be a special game for me.”

“All the Inter players are very good,” Thuram acknowledged.

“They have a strong team but we hope we can trouble them anyway.” (RT)