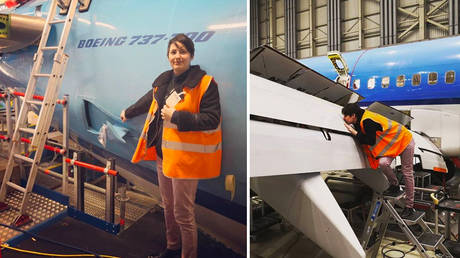 The heart wants what it wants, as Emily Dickinson once wrote. But the American poet could hardly have envisioned the case of a German woman who has revealed plans to wed “the love of her life” – a 40-ton jumbo jet.

Michele Kobke has been dating the Boeing 737-800 since she met it at Berlin’s Tegel Airport in 2014. She says was immediately attracted to the jet’s wings, winglets and thrusters when she spied it through the airport window.

Thus a whirlwind romance was sparked that reached new heights when Kobke was allowed stand on the plane’s wing and kiss it last year. The 30-year-old hopes the relationship will really take off when the pair tie the knot at an intimate ceremony in the Netherlands in March.

“The time in the hangar was the most beautiful moment of my life and when I was with him, we enjoyed our time together, we kissed and I caressed him,” the woman gushed, according to the Mirror.

Kobke has only met her beloved “Schatz,” meaning darling, twice since. So, to keep love-sickness grounded, she cradles plane components in bed at night. She hopes to one day move into a hanger with the aircraft so they can be together all the time.

Also on rt.com Sex with a ghost & phantom pregnancy: A woman’s account of marriage to a 300-year-old dead pirate

The German woman has very clear ideas about how she wants the couple’s special day to go. “I wouldn’t want to put on a white dress, but dress really smartly with black trousers and a black blazer,” she explained.

I want to have someone marry us and say, ‘Do you want to marry your 737-800’ and I say, ‘Yes,’ we kiss, and then I’m immortalised with him and we can be together forever.

Kobke’s peculiar relationship with the Boeing is highly unusual but it’s not unheard of. It’s an example of objectophilia, a form of romantic attraction focused on particular inanimate objects. (RT)