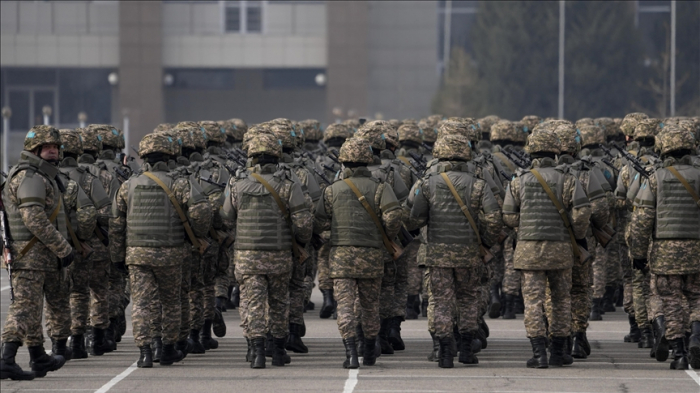 The gradual withdrawal of Russian-led peacekeeping troops from Kazakhstan has been completed, the Central Asian nation’s Defense Ministry announced on Wednesday, according to Anadolu Agency.

“The withdrawal of units of the Collective Peacekeeping Forces of the CSTO (Collective Security Treaty Organization) from Kazakhstan has been completed,” the ministry said in a statement.

The last units of the peacekeeping forces — consisting of nearly 2,500 soldiers and 250 pieces of equipment — from Russia, Belarus, Armenia, Kyrgyzstan, and Tajikistan left the airport of the former capital Almaty aboard an Il-76 aircraft of the Aerospace Forces of Russia, it added.

“This operation will go down in the history of the CSTO not only as an example of the practical application of the mechanisms worked out in the course of many years of cooperation, but also as a real confirmation of the allied spirit and military fraternity of our states,” according to Col. Olzhas Khusainov, head of the Department of International Cooperation of the Defense Ministry.

Read more:   Referencing Biles and Osaka, ill-informed detractors are taking glee at Djokovic's US Open tears – they should learn the facts

On Jan. 2, massive protests broke out in Kazakhstan over a rise in liquefied petroleum gas (LPG) prices in the city of Zhanaozen in Mangystau, which later turned into clashes with the police, with the most violent developments in Kazakhstan’s former capital Almaty.

Kazakhstan’s President Kassym-Jomart Tokayev then requested help from the CSTO allies and in a short period, the peacekeepers arrived in the country and backed the Kazakh law enforcement in restoring order.

The end of emergency measures in Kazakhstan as of midnight Tuesday brought life back to normal, especially in the capital Nur-Sultan, the country’s largest city Almaty, and the regions of Atyrau, Jambyl, Kyzylorda, and Mangistau.

Security measures on the streets and a curfew imposed at certain hours were lifted. Restrictions on travel into and out of cities were also removed.

Azerbaijan has recorded 9 new coronavirus cases, 7 recoveries, and no deaths over the past…

Azerbaijan and Italy to create synergy in design sphere – ambassador

Azerbaijan and Italy create synergy in sphere of design, Ambassador Extraordinary and Plenipotentiary of Italy…

President of the Republic of Azerbaijan Ilham Aliyev has received Deputy Prime Minister, Minister of…