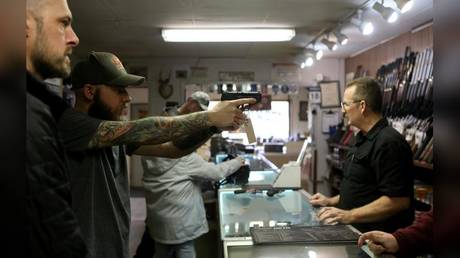 A customer is shown checking out the feel of a pistol last year at the Frontier Arms & Supply gun shop in Cheyenne, Wyoming. © Reuters / Jim Urquhart

A new Rasmussen Reports poll shows that 35% of US adults who live in gun-owning households have bought more firearms over the past year, amid increasing violent crime and riots in many of America’s largest cities.

The Rasmussen poll was conducted on May 3-4 and released on Friday. The gun-buying spree also coincided with a spate of mass shootings, which President Joe Biden and other Democrat politicians have cited as justification for enacting new restrictions on firearms.

Also on rt.com Biden singles out ‘white supremacist terrorism’ as the most lethal threat to America, as he pushes for gun control & police reform

Rasmussen’s figures are corroborated by FBI data. The bureau reported that a record-high 39.7 million background checks were carried out last year for US gun purchases, up 40% from 2019’s total. Through the first four months of 2021, nearly 16 million background checks were performed, which was up 31% from 2020’s blistering pace and exceeded full-year totals from as recently as 2010.

The buying binge is so strong that ammunition is in short supply. Nearly half of the Rasmussen poll respondents said they had difficulty finding ammo for their weapons. Shortages are reportedly so severe in some areas that police departments are struggling to find enough rounds for the training and certification of their officers. (RT)