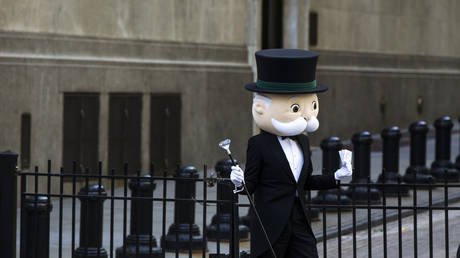 A new “socialist” Monopoly reboot has won over conservatives and triggered eye-rolls from liberals – and mysteriously disappeared from store shelves faster than you can say “a spectre is haunting Europe.”

Monopoly: Socialism – subtitled “winning is for capitalists” and “what’s yours is ours” – has joined Hasbro’s increasingly bizarre stable of Monopoly spinoffs that now includes Monopoly Game of Thrones, Monopoly for Millennials, Monopoly Star Wars, and Monopoly Gamer. Or has it? As of Thursday night, the game is no longer listed on Target’s website, where it was sold for $19.99, and only a handful of copies are available on Amazon.com for the decidedly un-socialist price of $55.

Also on rt.com Meat tax will take food off poor people’s tables so that wealthy eco-socialists can feel virtuous

The short-lived game has already found a champion in Republican Senator Ted Cruz, who rushed to its defense after a multi-tweet smackdown from academic Nicholas Kapur, who pointed out that almost nothing in the game bears any resemblance to socialism, either in theory or in practice.

There are also tons of references to health food and veganism, despite the lack of any clear connection to socialism, apparently because what they share in common is that they are odious things that are fun to mock. 6/ pic.twitter.com/tKzkpQWZ36

But then when the minimum wage is increased, this wage doesn’t actually increase, but instead, once again for no reason the community fund pays money to a private bank. 14/ pic.twitter.com/8LBOk00laB

“Why [do] Leftie academics so fear pointing out the manifest failures of socialism?” Cruz tweeted on Thursday, warming to the idea so much he even suggested a few other spinoffs for the clearly idea-hungry Hasbro.

We could do the Cuba edition: start (in the 1950s) as the world’s top sugar producer; end up earning $25 per month and risking your life to put your children in rafts seeking freedom. 3/x

In addition to his laugh-riot Cuba and Venezuela editions – both of which, unsurprisingly, leave out the role of the US in creating those states’ problems – Cruz proposed “the University edition: you imagine a magic money tree; you give everything free to anybody who wants it; nobody works, studies, or innovates; and everybody gets an A!” (RT)