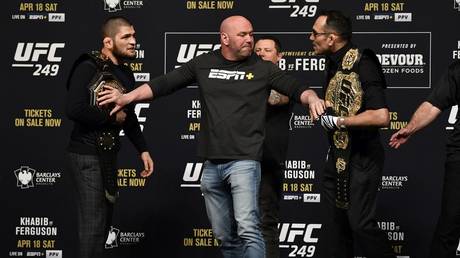 The ever-developing coronavirus crisis has already forced sports bodies to take measures to help mitigate its spread, but is the seemingly jinxed matchup between Khabib Nurmagomedov and Tony Ferguson next on the chopping block?

Aftershocks of the epidemic which has ravaged parts of Asia, Europe and beyond has left a sizeable impact crater on the global sporting landscape. Serie A football in Italy could scrapped entirely for the remainder of the season, while questions remain as to the status of upcoming events like the UEFA European Championships and the Tokyo Olympics.

‘I’ll listen to the experts’: LeBron James does coronavirus U-turn after vowing NOT to play in empty arenas (VIDEO)

In the United States, where the rate of those infected by the coronavirus is trending upwards, initial measures are being put into effect with regard to potentially barring fans from attending sporting fixtures and, if the trends impacting the European sports community are to make their way stateside, it may not be very long before a spate of fixtures fall foul of the crisis.

And while any mandated cancelations are being generally received by sports fans as an unfortunate necessity, fight fans have begun to ask questions as to whether or not coronavirus fears may KO the massively-anticipated UFC lightweight title fight between Khabib Nurmagomedov and Tony Ferguson set for the Barclays Center in Brooklyn, New York, on April 19.

Also on rt.com UFC 249: Tony Ferguson is the biggest threat to Khabib’s title, and ‘The Eagle’s’ press conference reaction shows he knows it

You will need little reminding that fate has conspired to nix a fight between the two standout 155lbs fighters on four previous occasions, as they have both twice pulled out in the past due to injury. But with their individual health (so far) not a concern for the latest match-up, it seems entirely plausible that the fight will be impacted by larger public health concerns.

As of Wednesday afternoon, New Rochelle – which is around 20 miles north of New York City – has been defined as a ‘containment area’, meaning that officials have instituted a quarantine of sorts to attempt to curb a localized breakout of the virus, but further reporting suggests that the newest tallies have identified 46 cases in the populous NYC area.

Following the trends of other affected regions which have seen localized breakouts, daily life appears certain to be impacted. New Yorkers have been advised against using mass transit, even with the subway system being targeted for large-scale disinfectant measures. Numerous workers have also been advised to remain at home if possible, while many local pharmacies are unable to keep up with the demand for health products such as hand sanitizer and facemasks.

Read more:   Venue of next meeting of Azerbaijani, Turkish and Georgian FMs disclosed

The next step, then, seems to be banning mass events. The city has already called off the annual St. Patrick’s Day parade, while it seems to be a matter of time before NBA games, at the very least, are held in closed stadia. What, then, for the roughly 19,000 people expected to attend next months Khabib-Ferguson fight?

Should UFC 249 indeed be forced to follow suit with other major sports and hold the event behind closed doors, in a move which would sap the year’s most anticipated fight of much of its atmosphere? Could the organization opt to move to event to a different territory, much as they did a little over a year ago when the Nevada Commission expressed hesitance to grant a fight licence to Jon Jones?

Or could the UFC even contemplate postponing the world’s most cursed fight for an incredible fifth time?

Simply moving the fight to another venue is an extremely complicated move. First, a venue of sufficient size must be available – something that is very difficult to guarantee for a Saturday night five weeks from now. The option for alternate venues is also complicated by Nurmagomedov’s position of refusing to fight in Nevada until he receives an apology for what he sees as unfair punishment for his part in the post-UFC 229 melee following his victory against Conor McGregor.

Holding the event in an empty arena would be a definitely strange experience, more akin to an episode of ‘The Ultimate Fighter’ than a high-level world title bout. The UFC could make very good returns on their pay-per-view model, but the costs associated with renting the cavernous Barclays Center without counting on a live gate would be prohibitive. The UFC could campaign for the fight to take place in their UFC Apex facility in Las Vegas, but that raises concerns about Nurmagomedov and Nevada once again. (RT)

In keeping with instructions of Azerbaijani President, Supreme Commander-in-Chief of the Armed Forces Ilham Aliyev,…