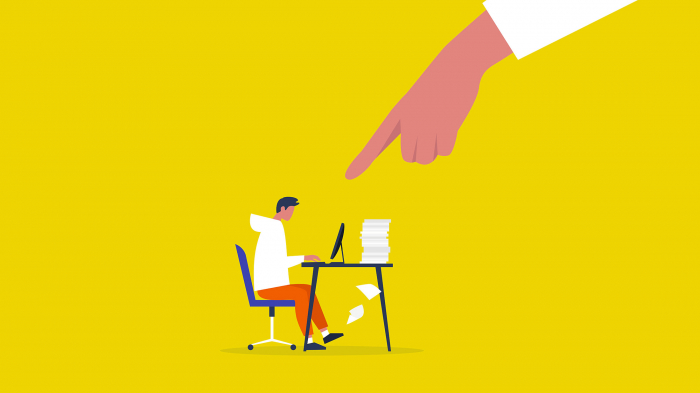 A noxious work environment can show up in any company – but some environments breed bad situations more than others.

When Saurav, 39, moved industries, he expected to have to adapt to a change in pace. What he didn’t expect was to be plunged into a toxic environment, where racial slurs were common and being combative was rewarded.

“Three very senior staff members made transparently Islamophobic comments about an employee who was leaving, using blatantly racist remarks,” he says. “I was astonished to see no internal reprimands or sensitivity training. The industry was a male-dominated sales environment where you simply had to be loud, brash, combative and extroverted to get along and ahead – this often meant taking a no-holds-barred approach to conversation and self-censoring.”

The toxic behaviour deeply embedded in Saurav’s workplace will be recognisable to many – research suggests that one in five American workers have left a job due to a toxic workplace culture, while 64% of employees surveyed in the UK said that experiencing problematic behaviours at work had negatively impacted their mental health. In Saurav’s case, the behaviour at his workplace came to light, but toxicity regularly goes unreported and unchecked in many workplaces.

A common conception is that toxic behaviours are often found in large corporations where competition is fierce and accountability is low – and yet some workers report that the same damaging culture can just as easily be found in smaller, less hierarchical organisations. How can we identify which workplaces are particularly prone to toxicity? And are workers stuck in noxious workplaces if they want to work in certain industries – or is there potential for change?

Although there isn’t a well-defined and consistent definition of what makes a workplace “toxic”, there are some key factors to look out for.

“A toxic workplace is a context in which abusive behaviours are almost normalised,” says Thomas Roulet, a professor of organisational theory at the University of Cambridge Judge Business School. “It’s both about how people behave poorly, and how others are affected. A toxic workplace is often also riddled with political behaviours – individuals trying to gain influence without thinking about the consequences for their collaborators.”

Read more:   Blinken says China 'didn't do what it needed to do' about Covid-19. Beijing says, we did… did you?

It’s easy to imagine the most toxic environments are in highly competitive and intensely corporate companies – much like the environment experienced by Saurav. But is this perception really accurate?

“High-pressure contexts are more likely to lead to toxic workplaces as stress and anxiety trickle down the hierarchy,” says Roulet. “But large organisations are also more likely to have good systems in place to address toxicity, for example, with opportunities to reach out to HR and initiatives to act on bullying behaviours.”

So, for many smaller companies, or organisations within industries typically considered kinder or more democratic, toxicity can still be an everyday occurrence. Pearl, 20, found herself horrified by toxic behaviours at a non-profit based in Europe when she moved there to take part in an internship.

“I started to notice that the company hired people like me who were from developing countries to work for them in the name of ‘making a difference’,” she says. “Both myself and full-time staff from developing countries were underpaid. If we mentioned this, we were told that we should be grateful for the opportunity, rather than having our complaints taken seriously. Being in an environment where I was expected to produce a high standard of work that was often underappreciated was tough.”

Pearl was ultimately offered a permanent role, which she declined. She says because the company were mission-led, they believed that their work justified the exploitative nature of their contracts, and says that she was often mistreated and told that she should be “glad” that she was getting paid at all.

Janine Yancey, founder and CEO of Emtrain, an organisation that has recorded more than 20 million employee sentiment responses about behaviours in the workplace, says this kind of toxicity is not uncommon in workplaces where managers and workers are overstretched. In both the non-profit sector and within smaller organisations, where funds are less plentiful and companies are often under-resourced, damaging company cultures have ample space to thrive.

“When smaller companies are understaffed, work around reducing toxic behaviour tends to fall to the bottom of the priority list,” says Yancey. “There has to be investment in proactively creating a culture that works for everyone.”

Yancey argues rather than a specific industry or type of organisation breeding toxic behaviour, there are common indicators that make any company more or less likely to become unhealthy. The resources a company possesses to manage these toxic signals will ultimately determine outcomes.

“Organisations where leaders understand the implications of their power, and where there are strong norms of behaviour, tend to be the least toxic,” she says. “This has to be more than just a written policy – it’s a cultural thing where people know to act a certain way, and everyone ascribes to that.”

Due to the complex and multi-faceted definition of ‘toxic workplaces’, it can be difficult to identify an environment where toxicity is commonplace – which can make it tough for interviewing workers to know what they’re stepping into. Yancey recommends digging deep into cultural norms during the interview: “Ask about norms of behaviour, what the leadership is like and whether they have coaching and training, and how the organisation sets tones of communication… if the company representative has no good answers to these questions, then that might not be the best sign.”

Hope for the future?

Although it’s still common for workplaces to get away with toxic behaviours, several high-profile cases of noxious company culture have surfaced in the past few years – which could potentially signal improved workplace culture in the future, across many different types of organisations.

In November 2021, Activision Blizzard employees staged a walkout after reports that chief executive Bobby Kotick had long been aware of harassment allegations. The state of California recently sued the video game company after employees complained of a “fratboy” culture, including unequal pay, promoting men over women and widespread sexual harassment. Just a few months earlier, the CEO of Scottish brewer and pub chain Brewdog was forced to respond to an open letter accusing the beer company of “toxic attitudes” and a “culture of fear”.

Yancey says it’s not a coincidence that both Brewdog and Activision Blizzard have faced public challenges in recent months.

“The younger generation of our workforce have been raised to speak truth to power and to speak out when they see a wrong that needs addressing,” she says. “That generational characteristic, in combination with the power of social media, which allows people to organise online and share messages at scale, is a new framework of accountability that didn’t exist even a few years ago. But it exists now, and it’ll get even stronger as boomers and Gen Xers retire.”

With toxic workplaces beginning to be named and shamed, and the Great Resignation now underway, employers are facing more pressure than ever to make sure that their workplaces are inclusive and attractive to potential and existing staff. Companies may need to prioritise stamping out damaging cultures – or risk coming under fire.

Saurav ended up being one of many trying to invoke change from the inside, joining the Diversity and Inclusion committee in order to ensure more BAME voices were heard within the company and pushing for more internal communications around employee behaviour. Although he eventually left the company, his response is indicative of the way that disenfranchised employees are trying to influence the cultures that they find themselves in – and perhaps changing how bosses will approach toxicity in future.