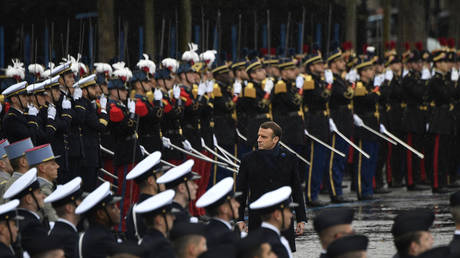 The EU’s dependence on a Washington in decline is looking increasingly precarious By Tarik Cyril Amar, a historian from Germany at Koç University in Istanbul working on Russia, Ukraine, and Eastern Europe, the history of World War II, the cultural Cold War, and the politics of memory. He tweets at @tarikcyrilamar.French President Emmanuel Macron inspects the troops. © Aurelien Meunier / Getty Images

The president of France, Emmanuel Macron, has started off his country’s presidency of the EU with a bold provocation. Speaking to the European Parliament in Strasbourg he has put his head above the growing anti-Moscow rhetoric and called for a dialogue about a continent-wide, “indivisible” security strategy that includes Russia, rather than existing to oppose it.

In reality, this is no surprise: as Macron pointed out, he has proposed a similar approach “for years” already. It is also an idea that is so obviously reasonable that it is almost boring. Why would the EU not engage in such an exchange with its militarily most powerful neighbor, on which it also depends for much of its energy? In fact, a historian looking back on this moment might well rub her eyes one day, wondering how something so simple wasn’t in place already.

What really makes Macron’s act of pointing out the obvious interesting is the almost comically hyperactive response it has triggered. The French president, the Financial Times hastened to alarm us in military jargon, “broke ranks.” Brussels bureaucrats have scrambled to distance themselves, accusing Macron of going it alone without forewarnings. An especially courageous, if anonymous, EU official – potentially from the Baltics or Poland – has called his whole idea “crazy.”

Josep Borrell, the EU’s top diplomat, has been in an almost indecent rush to make sure Washington knows that Macron was not speaking for him. NATO’s Secretary General Jens Stoltenberg and US Secretary of State Antony Blinken have both called for “unity” between the US and the EU with a fervor reminiscent of a Soviet party congress. And, as if on cue, a small brigade of Western publicists has stampeded all over social media to decry the French enfant terrible’s rude breach of etiquette as a “really unfortunate” assault on “Western,” again, “unity.”

This is all very strange, even rather absurd. Because it makes no sense at all as a reaction to what Macron has actually said, as you can easily find out for yourself by listening to a recording. 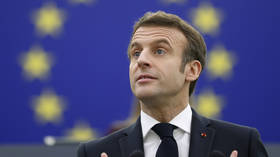 In fact, the panicked response can only be understood as really about something else. We’ll get to that. But first, let’s take a closer look at the French president’s real statements.

The dialogue between the EU and Russia, according to Macron should be “frank” – that is, in easily decipherable code, clear about differences as well as possible points of agreement. Security challenges should be anticipated instead of only reacted-to. Western Europe needs not only “strategic rethinking” but also “strategic rearmament,” the president said, while explicitly calling for a decisive stance against “manipulation” and “interference.” Given recent accusations flying between the West and Russia, this was a clear barb against Moscow. No less than the most stalwart US hawks or Green “value” moralists from Germany, Macron insisted on “principles” and “rules,” on inviolable borders and the “rejection of spheres of influence.” And so on. The examples could be multiplied, but you get the gist: “Appeasement” of Russia, this was clearly not. On the contrary, it was really quite a tough speech.

Moreover, France has been clear that no one is to be cut out of the loop. Defining Western Europe’s positions should proceed in stages, so the idea goes, first with a general and comprehensive consultation within the EU to define common positions, then – nota bene – coordinating with NATO, and only finally taking whatever has survived that process to the table to talk to Russia.

There you have it. a speech that was, actually, quite hawkish on Russia and a policy proposal that paid due respect to both all other EU members and to NATO, which of course is dominated by Washington. So what is it really that is so irritating about Macron’s initiative to so many in the West? 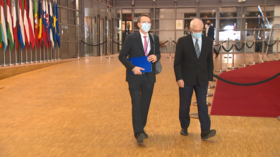 In short, it isn’t really about the EU’s relationship with Russia at all. In reality, he’s run into trouble (if probably deliberately) because he has implicitly but clearly challenged the bloc’s relationship to the USA.

His insistence that Western Europe must not only have reliable security but be able to provide it on its own is certain to have rubbed ‘Atlanticists,’ those still stubbornly believing in voluntary dependence on the USA, the wrong way. In theory, Macron’s long-standing demand for “strategic autonomy” is not that contentious. But in practice it is one of those policies that is not supposed to have real consequences.

A Europe “independent in a violent world… of the whim of others,” in the French president’s words, does not exist, of course. Macron’s pretending it does and, in effect, calling for this fiction to become reality is an affront to the astonishingly large number of European politicians, think-tankers, and publicists who still invest an increasingly blind faith in a declining, unstable, and increasingly unpredictable America as their guardian.

It is this desperate faith – which clearly comes with much repressed doubt – that Macron implicitly questions when spelling out what strategic autonomy would mean if the EU actually meant it: “a proper defense industry” of its own, a definition of a “doctrine of its own security,” and as a result a “Europe that is independent and has the power decide its own future for itself and not to depend on the choices of the other major powers.”

Again, make no mistake: none of the above contradicts cooperation, even close cooperation with the USA. All it means is that the EU should transform its current security model as a dependent client of America (a dysfunctional leftover from the Cold War that ended more than thirty years ago) into a new one as an independent partner. (RT)