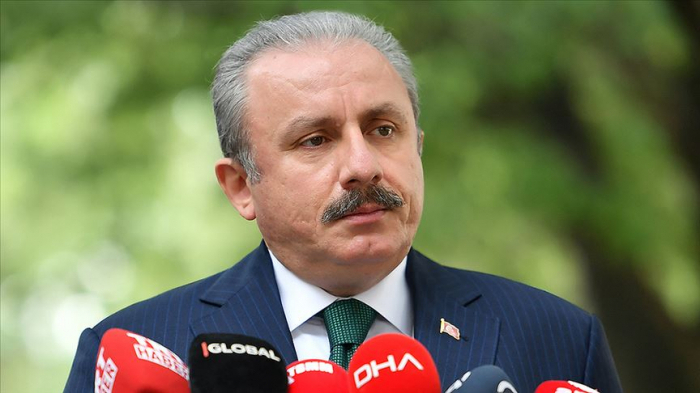 Turkey is always next to Azerbaijan and will be close until the end, Chairman (Speaker) of the Grand National Assembly of Turkey Mustafa Shentop said on Oct.20.

Shentop made the remark in the city of Ganja on the place of residential buildings destroyed from Armenian missile attack.

He said that Turkey supports all steps of Azerbaijan towards the liberation of its lands.

“We always support the just struggle of brotherly Azerbaijan. The terror in Ganja showed that Azerbaijan is right. Armenia committed a great war crime by targeting the civilian population,” the speaker noted. “Karabakh is the Azerbaijani land and this has been the case throughout history. It’s internationally recognized fact that Karabakh is Azerbaijan, and Armenia is an occupier. In this regard, there are UN resolutions of 1993, as well as documents of the European Union. Everywhere it is stated that Armenia occupied the territories of Azerbaijan.”

“These resolutions and documents require the immediate withdrawal of the Armenian occupation forces from all territories of Azerbaijan. Even if there is a war going on, it must be fought according to certain rules. Shelling civilians is a crime,” he also noted. “It must be shown to the whole world that Armenia is targeting civilians.”

According to the latest reports, as a result of the Armenian Armed Forces’ missile attack on residential areas in the central part of Ganja city, the second-largest city of Azerbaijan located outside the front line zone at nearly 01:00 (GMT +4) on October 17, 14 people were killed, 52 people injured, and numerous civilian infrastructure facilities and vehicles were heavily damaged.

Read more:   How lethal is Covid-19 really? Fatality numbers from Italy are misleading

Today, Turkey is honoring the memory of the martyrs who died in the Patriotic War…

With so many confusing statistics, just how well is Russia coping with Covid-19?

Russian Covid-19 statistics are a nightmare to decode. Different numbers from various government bodies and…