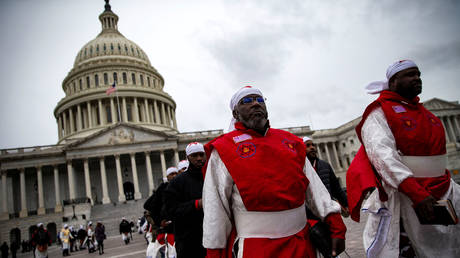 One of the suspects in the shooting at a kosher grocery in Jersey City – which left three civilians, one police officer and both attackers dead – has been linked to the fringe religious group called Black Hebrew Israelites.

The man who opened fire on the JC Kosher Supermarket on Tuesday was linked to the Black Hebrew Israelites, law enforcement sources told media on Wednesday. The BHI are a black supremacist movement whose members believe they are the true descendants of the ancient Israelites.

David Anderson had made antisemitic and anti-police posts online before embarking on the rampage that is reportedly being investigated as a possible hate crime. The influence of drugs and mental illness are also being considered as factors.

Surveillance footage from the attack showed that Anderson and his companion, Francine Graham, deliberately selected the kosher grocery as their target, entering the store with high-powered rifles blazing. They terrorized the market for the better part of an hour, killing two Hasidic Jews and an Ecuadorian immigrant before they were gunned down by police themselves.

The black-clad suspects had driven a mile to the store, a local landmark for Jersey City’s growing Hasidic community, after shooting and killing Detective Joseph Seals in a graveyard. Seals had attempted to question the pair about a homicide committed in Bayonne, in which they were suspects, upon recognizing the stolen U-Haul van they were driving.

While a “manifesto-style note” was reportedly found in the shooters’ van along with a live pipe bomb and several other weapons, the religious-flavored text did not provide any clear insight into a motive for the attack, according to law enforcement.

It is not clear whether Graham was also involved with the BHI. Her brother told local media that he was unaware of such a connection, though a neighbor claimed she was “coerced into a militant religion” and could be heard chanting an “evil” translation of the New Testament before defaulting on her mortgage and moving out last November. Jersey City Mayor Steve Fulop, however, wasted no time attributing antisemitic motives to the shooters.

The BHI are somewhat notorious for their confrontational public behavior, which often involves hurling racial epithets and other insults at passersby. Even the controversial Southern Poverty Law Center (SPLC), a self-styled civil rights outfit that positions itself as the societal arbiter of “hate,” has described them as a “hate group.”

The group achieved viral fame earlier this year, when members were filmed verbally abusing a group of white teen boys from Covington Catholic High School at an anti-abortion protest in Washington DC. Footage of the incident was deceptively edited to show the boys, sporting bright red Make America Great Again hats, appear as aggressors against a Native American activist.

The alleged involvement of BHI in Tuesday’s shooting caused a feeding frenzy on social media, as people who’d been on the receiving end of the group’s verbal attacks rushed to express solidarity with the victims… (RT)