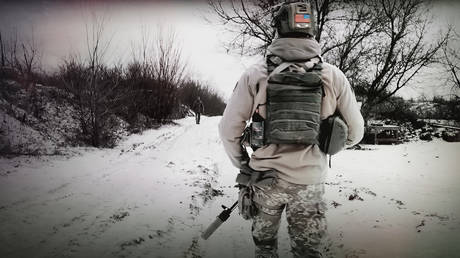 “I’m beginning to think you aren’t in Paris?” read a screenshot of a text message the Group shared recently via Instagram stories, where they also happen to be broadcasting their current journey throughout eastern Ukraine. 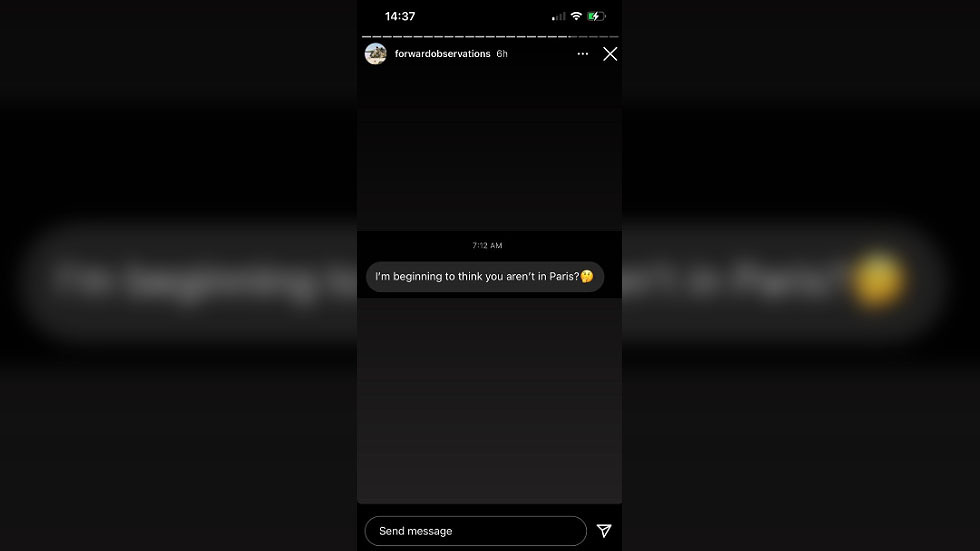 The conflict, often described as ‘frozen’, between government forces and separatists in the region, known as the Donbass, flared up in 2014, after violent street protests led to the Ukrainian government being overthrown. Kiev sent troops to parts of the Russian-speaking Donetsk and Luhansk regions, which refused to recognize the new regime. The conflict had stalled by March 2015; however, sporadic fighting there has been occurring ever since.

In recent months, Western leaders have been speculating that Moscow, which has been accused of controlling the separatists, is planning an all-out offensive against its neighbor. The allegations are based on the alleged buildup of Russian troops close to the border. The Kremlin has repeatedly denied the accusations.

The US and UK began delivering ‘lethal aid’ to Ukraine last week in an effort to thwart supposed Russian aggression. Almost 100 tons of “lethal aid,” including ammunition intended for “the front line defenders of Ukraine,” were delivered on January 22, the US Embassy in Kiev said.

Given the circumstances, a string of photos from Donbass showing the group of Americans in combat gear holding firearms could not have gone unnoticed. Forward Observations, which apparently consists mostly of former American servicemen, came into the spotlight after Russian military-related social media communities started discussing their e-bravado over being in the conflict zone.

Men with stars and stripes shared pictures of themselves, faces blurred, as they arrived in Severodonetsk. This is where the 53rd Separate Mechanized Brigade of the Ukrainian Ground Forces is deployed. It apparently includes ex-fighters from the currently nonexistent infamous volunteer Aidar Battalion, which was staffed by right-wing individuals often described as ‘neo-Nazi’ by the media. 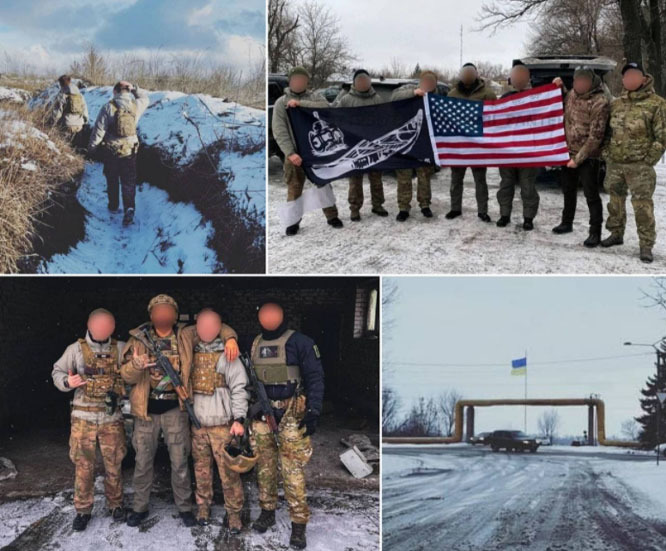 “…the replenishment of Ukrainian trenches with American suicide bombers. But the funniest thing is, the Americans themselves are filming all this along with Ukrainian soldiers, and then they themselves are uploading it to the internet. It’s either one or the other. Either the Americans treat their presence at Ukrainian positions as a visit to the zoo, or they work for the GRU,” Joker DNR Telegram channel, which is referred to as a ‘Ukrainian military insider’ by the media, wrote.

Others were quick to label the soldiers ‘mercenaries’. The media also picked up on the claims, with the head of the self-proclaimed Donetsk People’s Republic, Denis Pushilin, commenting on the matter by saying that Western ‘mercenaries’ are ‘present’ in the war-torn Donbass region, although the intelligence is very ‘cautious’ and nothing has been declared ‘official’.

However, sharing location data up to exact geo coordinates for everyone to see might be a little too out of character for private military contractors. 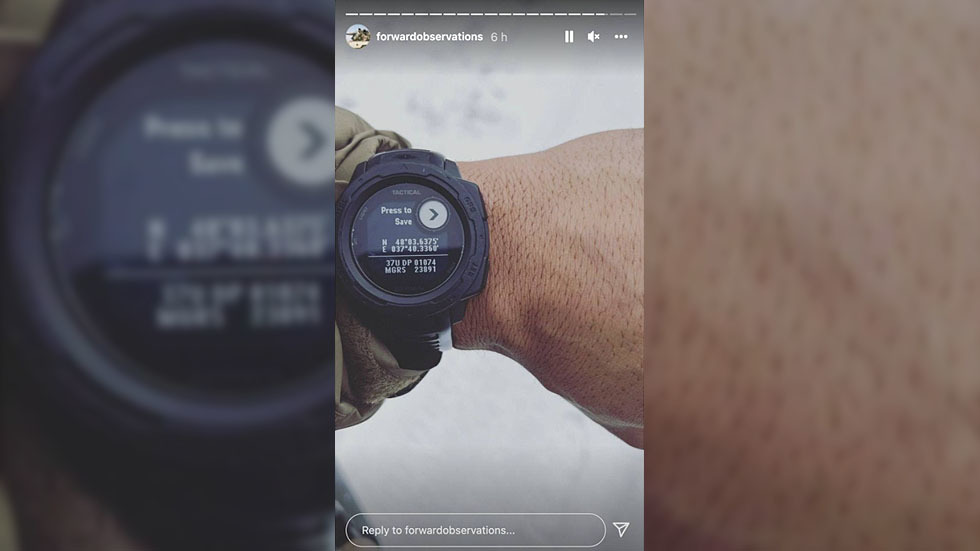 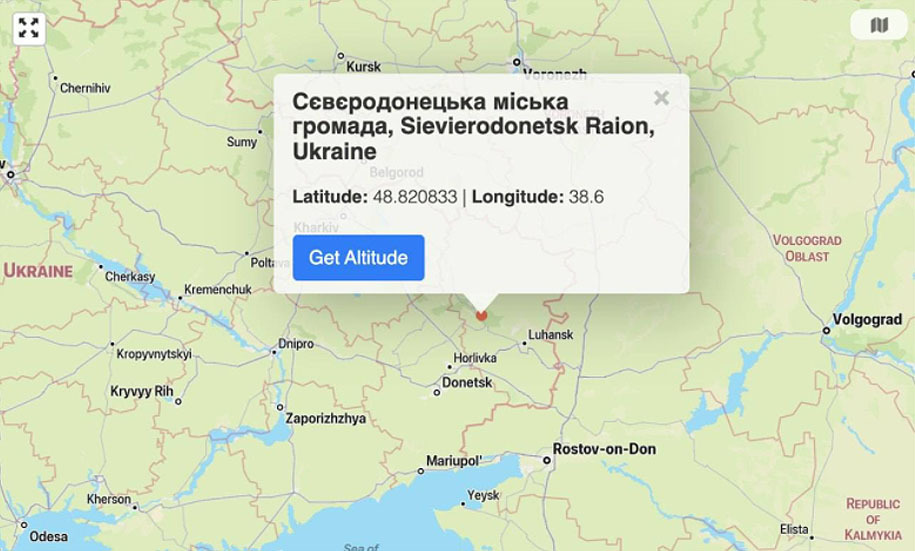 What is Forward Observations Group?

The website of Forward Observations Group provides zero information on who they are or what they do. At the time of writing, the only data the website contained was a description of a ‘trauma pouch’, available for purchase at $85.

Although determined by some Google search results as a ‘defense company’ that provides ‘security consulting and tactical training’, when asked by RT about their self-identification, Forward Observations responded by saying, “We sell merchandise and have published 3 coffee table books.” Which they have.

That information alone makes it seem like they could well be preparing the Ukrainian armed forces for a fashion week in Kiev, or providing them with training on how to be top-notch Instagram influencers.

Derrick Bales, the group’s founder, made headlines last year exactly under that label. ‘Ex-US Soldier Turned Influencer Criticized for Ukraine War Trip With Neo-Nazi’, VICE World News reported at the time. One of the pictures Bales posted then was captioned “up to some s**t in Ukraine,” and another picture featured the US citizen brandishing an assault rifle.

His subscribers lashed out at him after noticing that some of the photos tagged Vadim Lapaev, alias ‘Balak’, who US-government funded Bellingcat in 2018 described as a radical neo-Nazi who’d served with the ultranationalist Azov Battalion. Speaking to VICE, however, Bales insisted that he’d never taken part in combat while in Ukraine.

A Western geopolitics Telegram news channel with close ties to the military community and security specialists, /CIG/ Telegram | Counter Intelligence Global, has doubled down on the ‘Instagram influencers’ label, adding that the Group has “a niche marketing and advertising strategy centered around war.” CIG’s source familiar with the matter has further described them as ‘vet bros’ “living their dream.”

The group seems to also be connected to GBRS, for whom they have produced some promotional materials, available on YouTube. The GBRS Group identifies itself as a “veteran-owned, tier 1 training and services organization relentlessly committed to passing on critical skills and real-world experiences to end-users in military, federal, state and local special operations units.” They mainly provide tactical training, such as firearms manipulation, reduced signature operations, physical security assessment, and more.

“FOG is primarily hypebeast idiots who exist to extract money from larpers [live action role play, mock term for people who buy military gear or play airsoft with little to no real ties to the military – editor’s note] who buy patches and s**t. FOG contributors themselves are a mix of retired SF [SOF, special operations forces – editor’s note], larpers and cops,” another security specialist source said.

Occasionally, the Group does sell merchandise, such as hoodies, T-shirts, and, as mentioned earlier, trauma pouches. 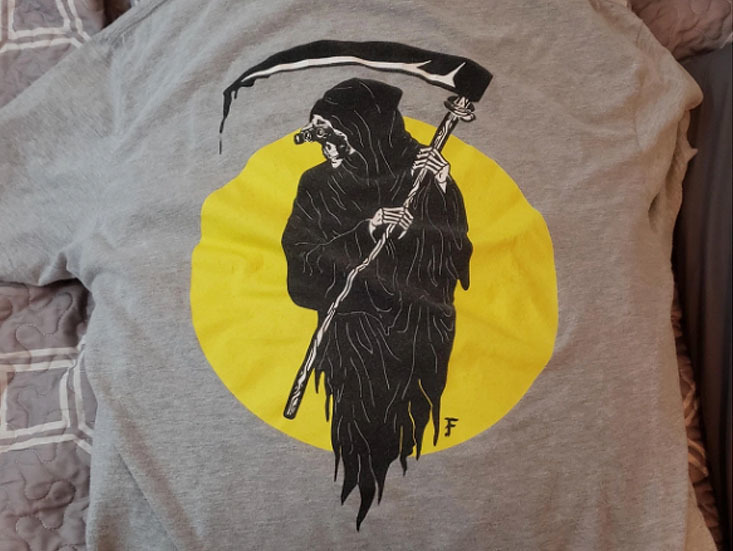 At RT’s request, an anonymous source from the security consulting group described FOG as “a very loose group” which shares “more or less fan content,” while “the guys who are actually involved come and go and kind of do their own things.”

Another source in the paramilitary community confirmed that FOG consists of Army rangers, SOFs, CAGs (Combat Applications Group, Airborne, Delta force) and SEALs. “They [bring] all kind of larp together in a few areas in the US, a lot of their meets happen in Vegas. They have a lot of industry connections as well as connections to those active in the military,” he said.

The books published by the group support the image. They include military photography, mainly SOF-related, as well as guest-written combat diaries, advice for operators, essays, interviews, and preaching on how to live life.

“Sometimes I daydream about dying a Warrior’s death. A glorious death. In combat, going down in a blaze of gunfire and glory. Fighting with my Brother’s,” an author mentioned as Snake Plissken in one of the books wrote. 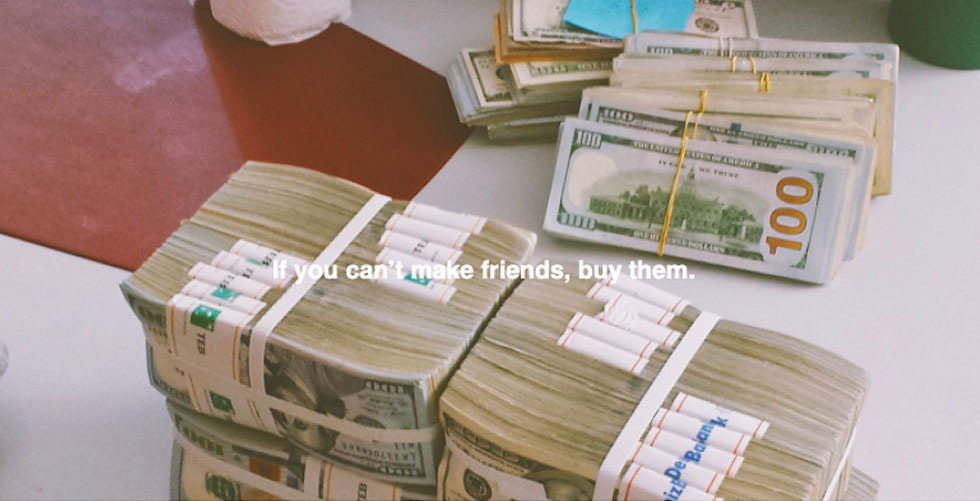 “Be like us. Focus that intensity on being the hardest motherf**ker on the face of the planet. Don’t take no for an answer, don’t second guess your decisions, and always come-in first place. If you want the glitz and glamour, be prepared for the war that comes with it. Properly prepare yourself, and you’ll enjoy the most rewarding experience a U.S. Citizen could ask for,” the Group writes.

Read more:   Golf bombshell Paige Spiranac claims she 'might throw up' over picking tour hulk Bryson DeChambeau for US Open

Some parts of the books bring up controversial topics, such as females in the special forces or mental health issues, which is usually considered to be off limits in the community. 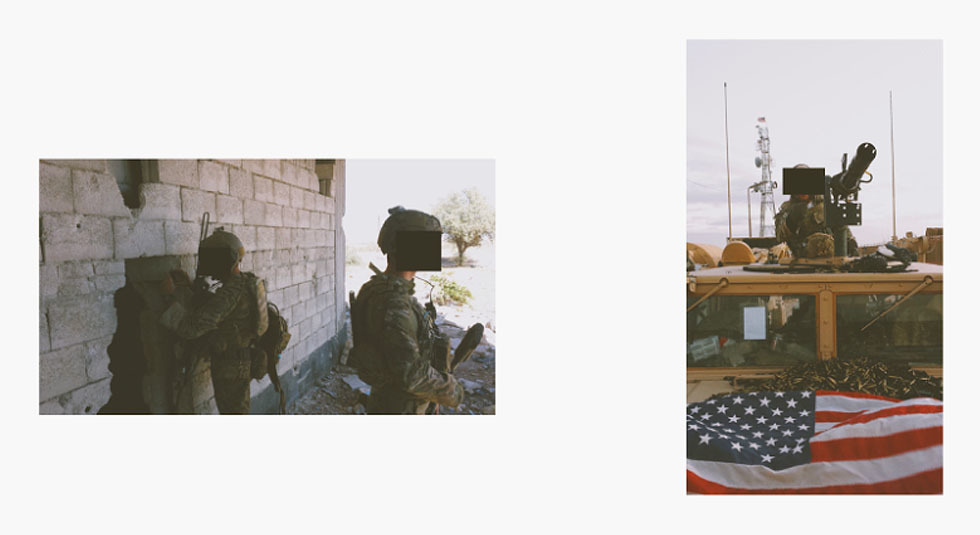 One of the books also includes an anonymous interview about US special forces operations in Syria. It mentions an “interaction” with “the Russians.”

“They [the Russians – editor’s note] “accidentally” launched the Russian equivalent of a Tomahawk missile over our patrol. Came way too close to us… At least it would’ve been quick.”

What are FOG doing in Ukraine?

Apart from documenting every step of their journey and occasional commentary on the level of Ukrane’s military training, the Group has also announced its plans to reveal Russia’s ‘covert’ actions in the region. 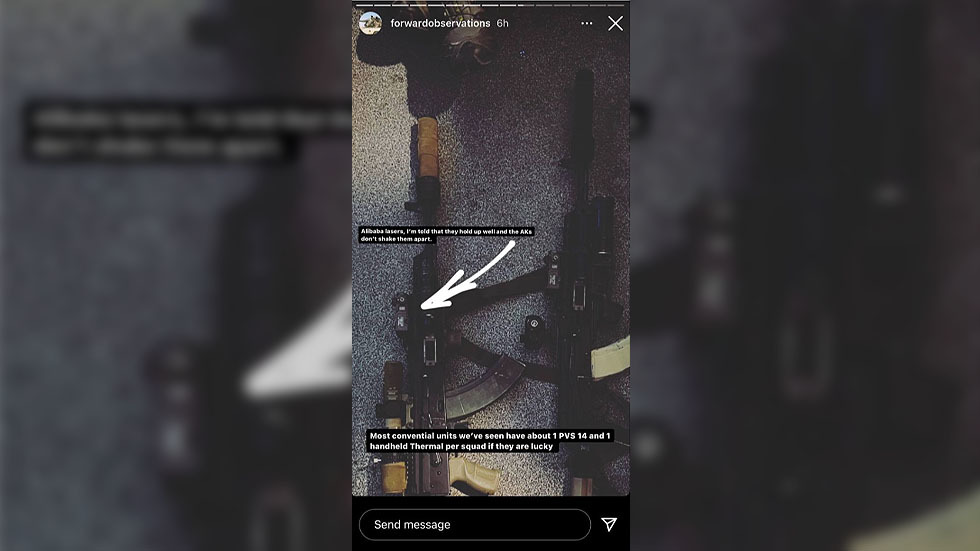 “We’ve traveled to the most forward positions of the front lines, walked the trenches ourselves at one point only 300m from Russian-backed separatists. We got to speak to soldiers and commanders from a multitude of units, conducting a myriad of different missions in the defense of Ukraine,” FOG said as it announced an upcoming YouTube video upload, discussing the possible scenario of an alleged Russian invasion. 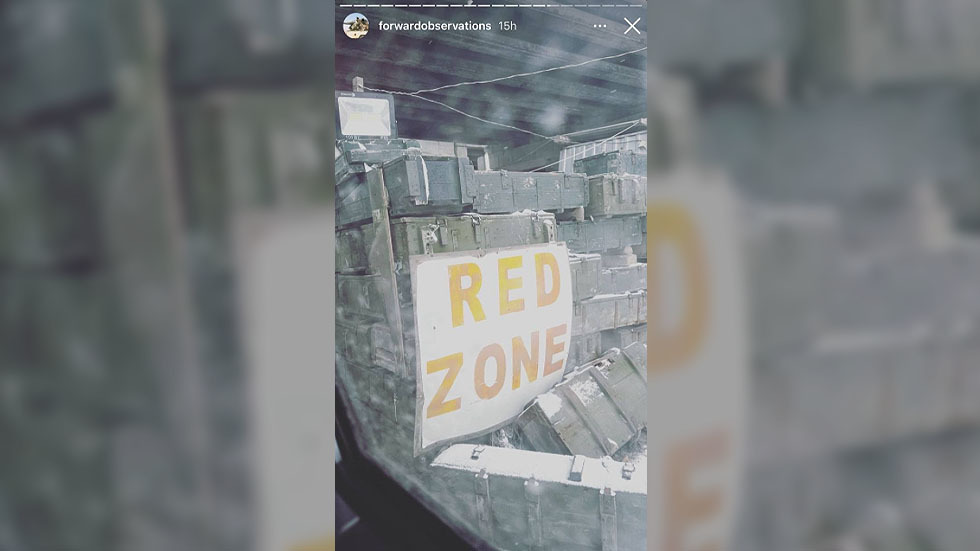 “Their presence in Ukraine is primarily to look cool and push their brand on the backs of Ukranians dying,” a source told CIG, elaborating on the Group’s activities in the region. “Your average FOG dude might give light tips to infantry in Ukraine but nowhere the amount they need”. 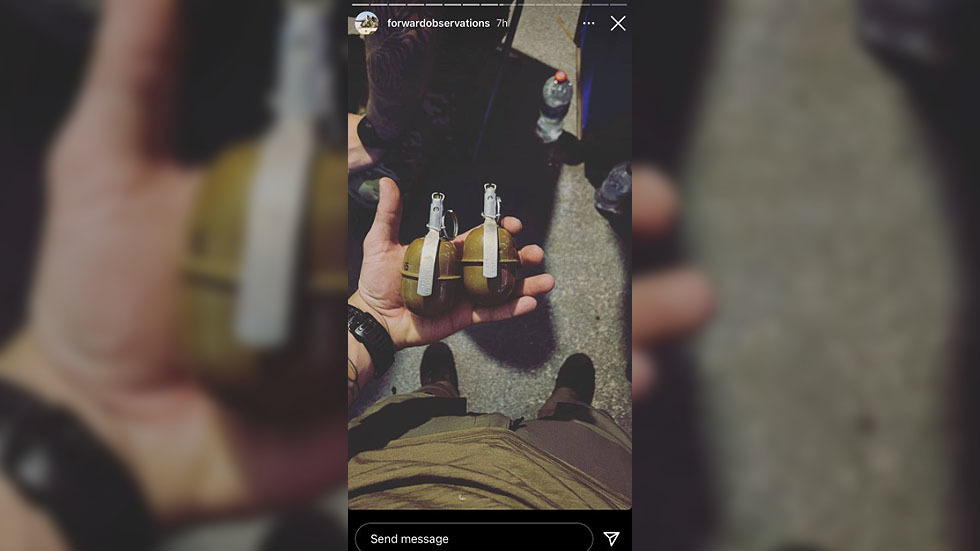 “The guys in Ukraine are sort of like tourists, their version of when an Instagram model goes to some island for a few days, “Yes, it is fun”, but it’s mainly to take pictures and sell their image,” another paramilitary source confirmed at RT’s request.

Azerbaijan has recorded 9 new coronavirus cases, 7 recoveries, and no deaths over the past…

Azerbaijan and Italy to create synergy in design sphere – ambassador

Azerbaijan and Italy create synergy in sphere of design, Ambassador Extraordinary and Plenipotentiary of Italy…

President of the Republic of Azerbaijan Ilham Aliyev has received Deputy Prime Minister, Minister of…