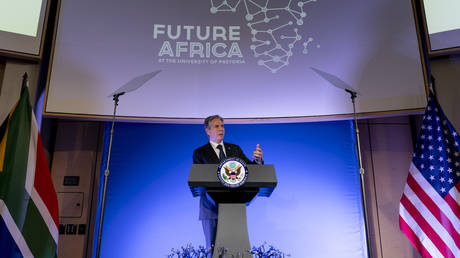 US Secretary of State Antony Blinken gives a speech on the US Africa Strategy at the University of Pretoria in Pretoria, South Africa, August 8, 2022 © AP / Andrew Harnik

President Joe Biden is hoping to stand against Beijing with democracy, vaccines, and climate policy US Secretary of State Antony Blinken gives a speech on the US Africa Strategy at the University of Pretoria in Pretoria, South Africa, August 8, 2022 © AP / Andrew Harnik

The White House on Monday published its new strategy for Sub-Saharan Africa, which explicitly aims to counter China’s extensive investment on the continent and oppose Russia’s supposed “harmful activities” there.

The plan does not set out any concrete dollar amount that the US intends to spend in Africa. Rather, it outlines Washington’s broader policy aims on the continent, some of which overlap with the $600 billion ‘Partnership for Global Infrastructure’ plan announced by the leaders of the G7 countries in June.

The US says it will “foster openness and open societies” by promoting democracy and anti-corruption initiatives, “deliver democratic and security dividends” by opposing authoritarian leaders and promoting women’s and LGBT rights, “advance pandemic recovery” by delivering Covid-19 vaccines and support “climate adaptation and a just energy transition” by reducing carbon emissions and investing in the mineral extraction necessary for green energy technologies. 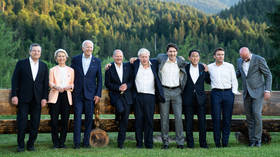 While the US plan is heavy on buzzwords, it is competing with a Chinese vision for Africa that Beijing says has already delivered tangible results.

Trade between China and Africa rose by 35% in 2021 to $254 billion, Bloomberg reported last week. Under its Belt and Road Initiative, Beijing has built ports, roads and other infrastructure in 43 countries in Sub-Saharan Africa.

Although the pace of this investment has slowed since the coronavirus pandemic hit in 2020, China loaned approximately $126 billion to African countries between 2001 and 2018, and spent $41 billion on foreign direct investment there, according to figures from the US-based Foreign Policy Research Institute (FPRI).

The FPRI warned that this influx of investment has made African leaders more likely to side with China in UN voting, and the US’ latest strategy echoes these concerns. Beijing “sees the region as an important arena to…advance its own narrow commercial and geopolitical interests, and weaken US relations with African peoples and governments,” the document stated. (RT)