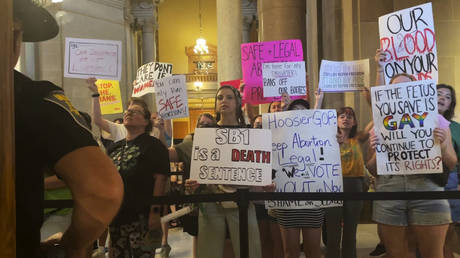 The White House on Saturday described a new ban on almost all abortions in Indiana as “devastating,” and called on Congress to make abortion access a legal right nationwide.

Indiana Governor Eric Holcomb signed the ban into law on Friday, after it passed both chambers of the Republican-controlled state legislature. The law, which takes effect on September 15, outlaws all abortions except in cases of rape and incest, where the mother’s life is in danger, or if an unborn baby is diagnosed with a fatal abnormality.

Hospitals will be the only locations allowed to perform the procedures, meaning the state’s seven abortion clinics will be shut down. Doctors who perform illegal abortions will lose their medical licenses.

White House Press Secretary Karine Jean-Pierre described the law’s passage as a “devastating step” and “another radical step by Republican legislators to take away women’s reproductive rights and freedom.” (RT)