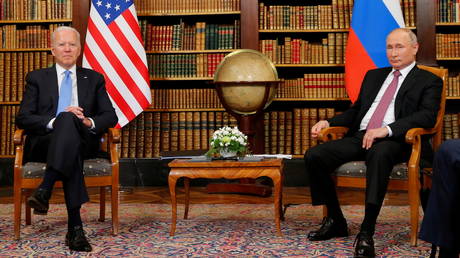 Atomic warfare was top of the agenda as Russian President Vladimir Putin and his US counterpart, Joe Biden, met for crunch talks last week in Geneva, amid escalating hostilities and talk of a return to a ‘Cold War’ mentality.

The first summit between the pair gives some room for cautious optimism. The atmosphere was respectful and calm, compared to how it might have been, and there seemed to be few aggressive or emotional accusations flying around in the way that has dominated relations between Moscow and Washington in the past.

Even more significantly, the two leaders put pen to paper on a new document: the Presidential Joint Statement on Strategic Stability. While commentators and Russia-watchers have looked to analyze everything from body language to the sandwiches available at the summit for clues as to how it went, the signed statement itself has received little attention.

It is common knowledge that nuclear weapons are probably the only area in which Russian and American supremacy is unchallenged. That status quo is also one of the most significant factors in global peace and security, given the scale of destruction atomic bombs can yield, and the fact Moscow and Washington will likely never be rivaled in the size of their arsenals.

Also on rt.com After two months back home, US ambassador announces he’ll return to Moscow ‘soon’ following progress made at Putin-Biden summit

At the same time, that nuclear standoff has prevented, and continues to prevent, major wars between the great powers. And yet, this isn’t inevitable. Strategic stability – or taking away the incentives for one side to strike first because of the devastating consequences of retaliation – needs to be constantly managed. To work, nuclear deterrence must be accompanied by arms control and risk-reduction mechanisms.

This is where the Presidential Joint Statement signed in Geneva means the most. At just three paragraphs long, its text hardly weighs in as one of the densest documents in international diplomacy, but it does still raise a number of important issues and challenges.

First and foremost, both sides reiterated their belief that nuclear war cannot be won and must therefore never be fought. That might sound rather straightforward, but the old adage first agreed on by American president Ronald Reagan and Soviet premier Mikhail Gorbachev, has fallen out of fashion in recent years, and efforts to revive it have come to nothing.

Read more:   'We will always be Australia,' PM defiant after Beijing voices its grievances and warns against making an enemy of China

Instead of representing a genuine atomic bloodlust on either side, the fact this important position was quietly shelved likely had more to do with US negotiations in North Korea – which, by the way, offered up no comment about the summit. Now the two presidents are on the same page – at least when it comes this topic – we must hope other nuclear states will join them, and sooner rather than later.

The second important area of focus for the statement is one calling for robust “bilateral” dialogue between Russia and the US. This is a welcome step away from that on “bringing China in” when it comes to negotiations. Of course, China will eventually have to join the formal arms control arrangements. Likewise, so will the UK, which is also increasing its nuclear arsenal, although in a different manner, and France, which can be an even tricker customer than China. But, as of today, Russia and the US still have a lot to do themselves without worrying about third parties.

The statement also talks of other efforts to avoid nuclear war. While “arms control” and “risk reduction” are frequently muddled up, it makes sense to separate the two. The “arms control” track will ideally result in the New START follow-up treaty and, hopefully, some other formal agreements addressing new domains of strategic military competition. The “risk reduction” track should then tackle the risks of actual military conflict, which can be sparked by all sorts of unpredictable events, and could inadvertently cross the nuclear threshold.

Some scholars include the ‘Reagan-Gorbachev statement,’ on which the Geneva agreement was based, in the lists of risk reduction measures as well. It remains to be seen if any of these areas of joint work will succeed, but the fact that, in the words of President Biden, some “dangerous and sophisticated weapons” were discussed in Geneva means there is a mutual interest in finding joint solutions.

Some 45,734 people were vaccinated against COVID-19 in Azerbaijan on July 23 referring to the…

Azerbaijan has detected 371 new COVID-19 cases, 153 patients have recovered and 3 patient has…