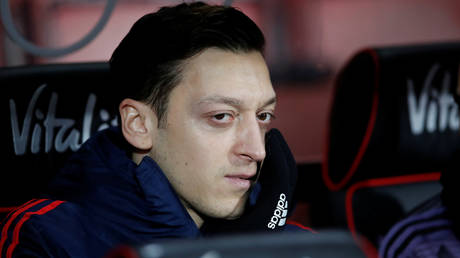 Mesut Ozil has been frozen out at Arsenal. © Reuters

Mesut Ozil may well have played his last game for Arsenal having been exiled from the club’s first-team squads, but while manager Mikel Arteta insists it was a “football decision,” there’s seemingly much more at play.

Ozil has not played for the Gunners since March 7, and his wait to feature for them again will continue unabated after he was left out of their Premier League and UEFA Europa League squads.

“What I can say from my side is that it is a football decision,”Arteta said. “My conscience is very calm because I have been really fair with him.

“I have to be the one getting the best out of the players. It is my responsibility. It is nothing related to any behavior or, like I read, the pay cuts.

“It’s my decision. If someone has to [be blamed] blame me. Here I feel at the moment that I have failed.”

There could be some merit in dropping the German based on his form, which has been on a downward trajectory in recent years.

Indeed, few would agree that the 32-year-old has justified the £350,000-per-week contract extension he signed in January 2018 – which was handed to the £42 million signing six months before the club would have lost him for free – with his performances since.

Prior to signing the deal, Ozil had contributed 36 goals and 64 assists for Arsenal since he arrived from Real Madrid in 2013. Since putting pen to paper on his current contract, he has found the net eight times and set up 13 goals.

As a result of that dip in form he was in and out of the side under Arteta’s predecessor, Unai Emery, but he looked to have regained his place in the team when the 38-year-old Spaniard took charge – starting each of Arteta’s first 10 Premier League games before the season was halted due to the pandemic.

Ozil did not get on the pitch once after football restarted last season, and he has not featured in a single matchday squad in this campaign.

Yet as much as his form may have declined of late, his status as the club’s top earner – and until recently one of Arsenal’s best players – makes the decision to exile him completely baffling from both a footballing and a business standpoint.

As such, it’s impossible to ignore the other factors that may have contributed, despite Arteta’s denial.

In a statement he released on Twitter on Wednesday following the news of his Premier League snub, Ozil perhaps provided a hint as to another reason he may have been left out, as he vowed to “continue to train as best as I can and wherever possible use my voice against inhumanity and for justice.”

It’s likely the playmaker was referring to comments he made in December last year – shortly before Arteta took over – drawing attention to the plight of Uighur Muslims in China.

More than one million Uighurs are thought to have been detained in what China describes as “re-education centers” in the Xinjiang region of the country, and the state has faced accusations of human rights abuses including forced mass sterilization of women, which it denies.

Arsenal quickly distanced the club from the comments with a statement on Weibo, a Chinese social media platform similar to Twitter, in which they said: “The content published is Ozil’s personal opinion. As a football club, Arsenal has always adhered to the principle of not involving itself in politics.”

The Gunners’ reaction, which Ozil later described as “disappointing,” was as shameful – human rights are an issue of morality, not politics – as it was unsurprising.

The club own a chain of Arsenal-themed sports bars and restaurants in China and also have an official lottery partner and vehicle provider based in the country.

Another of Arsenal’s official partners is Japanese company Konami, who make the Pro Evolution Soccer video game series. Following his comments, Ozil was removed from the Chinese edition of the game and his profile on Weibo, where he had amassed four million followers, was erased.

Meanwhile, Arsenal’s next match – a 3-0 defeat at home to Manchester City – was dropped by Chinese state broadcaster CCTV despite their efforts to appease them.

Ozil was left out of the matchday squad for their following game at Everton in interim boss Freddie Ljungberg’s last fixture in charge.

Given Ozil did initially return to the team under Arteta the extent of the impact his comments had on his exile is unclear, but if Arsenal have sought to protect their commercial interests at the expense of one of their own, it’s akin to selling their soul.

Another potentially contributing factor in Ozil being dropped is his refusal to agree to a pay-cut at the start of the pandemic, even if it was explicitly denied by the coach.

Speaking to The Athletic in the summer, the midfielder speculated that it may have hurt his chances of playing.

“Possibly the decision affected my chances on the pitch, I don’t know,” he said. “But I’m not afraid to stand up for what I feel is right – and when you see what has happened now with the jobs, maybe I was.”

Ozil was widely criticized for not joining his teammates in accepting a 12.5 percent cut to help the club deal with the loss of revenue caused by Covid-19. He said he was not the only player to refuse but was the only one named.

“People have been trying for two years to destroy me,” he said.

As the club’s biggest earner, it wasn’t a great look for the German FIFA World Cup-winner, but he said players were “rushed into it without proper consultation” and weren’t given all the necessary information, including what the money saved by the club would be used for.

Also on rt.com ‘Shame on you’: Piers Morgan rips into Mesut Ozil after star ‘refuses’ pay-cut during coronavirus crisis (VIDEO)

Ozil was vindicated in his decision in August when the club – owned by Stan Kroenke, who has an estimated worth of $8.3 billion and is married to a Walmart heiress – announced they would make 55 staff members redundant amid the uncertainty of the pandemic.

Despite seemingly being unable to afford keeping the employees, the club managed to cobble together almost £80 million to spend on new players like Thomas Partey in the transfer window, and in doing so showed their true colors.

Partey’s £45 million arrival on deadline day was particularly egregious, given the club had let go of Jerry Quy – who played mascot Gunnersaurus for 27 years – earlier that same day in another cost-cutting measure.

As if Quy’s exit wasn’t enough of a PR disaster for the Gunners, Ozil dealt a further embarrassing blow by generously offering to cover his wages for the remainder of his time at the club.

Ozil had not featured for Arsenal this season even before that episode, but it may have served as the final nail in the coffin when it came to leaving him out of their Premier League and Europa League squads entirely.

There may well be more that has happened behind the scenes that is yet to come to light and multiple factors might be at play, but right now the situation paints Arsenal in either a cowardly – if they cowed to their Chinese sponsors – or a vindictive light.

For the immediate future, Ozil will only be eligible to play first-team football in the Carabao Cup when it resumes in December or the FA Cup, which the Gunners will enter in January.

Arsenal will be able to submit updated squads in the Premier League and Europa League after the January window has closed, but Ozil probably shouldn’t hold his breath.