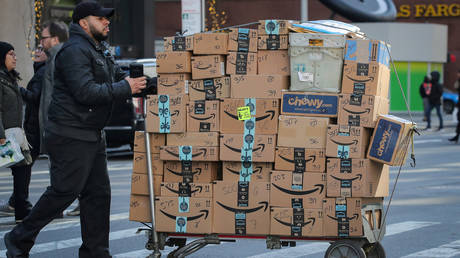 “Amazon stands ready to assist you in reaching your goal of vaccinating 100 million Americans in the first 100 days of your administration..,” Dave Clark, CEO of Amazon’s consumer unit, said Wednesday in a letter to Biden.

Our scale allows us to make a meaningful impact immediately in the fight against Covid-19, and we stand ready to assist you in this effort.

While many Americans cheered the offer, knowing Amazon’s prowess as a global leader in distribution, the timing struck some as agonizing after watching US Covid-19 deaths spike above 4,000 a day earlier this month. The nation’s accumulated death toll from the virus topped 400,000 on Tuesday.

Trump and Amazon CEO Jeff Bezos have feuded since at least 2015, and Amazon political donors favor Democrats over Republicans by a wide margin. Just as US House Speaker Nancy Pelosi admittedly stalled Covid-19 relief legislation to avoid letting Trump look good – and just as Pfizer was accused of delaying news of its positive vaccine trial results until after Trump lost the November 3 election – Amazon may have had political reasons for timing its offer to Biden’s inauguration, social media users suggested.

Read more:   Novak Djokovic's dad accuses media of ignoring Serbian superstar and says he is 'loved by all normal people'

“Good to know you care more about your political agenda than [the] lives of Americans,” one Twitter user said. “Where were you a month ago?” Another commenter agreed: “Amazon is now offering China Joe help to get the vaccine out to America. So, in other words, Amazon chose to let Americans die instead of doing this during the Trump administration.” Those who died while Amazon held back its help were “just collateral damage to the left,” still another observer said.

Amazon is now offering China Joe help to get the vaccine out to America. So, in other words, Amazon chose to let Americans die instead of doing this during the Trump Admin.

Can’t have Trump getting credit. And those people who died who could have gotten the vaccine earlier if Amazon had volunteered earlier…that’s just collateral damage to the left.

Author and comedian Tim Young said Amazon was silent for weeks after US vaccinations began in mid-December, “because ‘Orange Man bad’ was more important than caring for fellow Americans.” (RT)