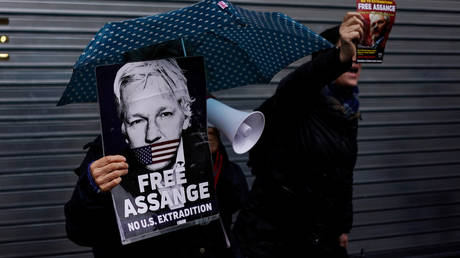 A London court is set to begin hearings to determine whether or not jailed WikiLeaks founder Julian Assange will be extradited to the US on charges of conspiracy where he faces life in prison.

Assange has languished in London’s top security Belmarsh Prison since he was dragged from London’s Ecuadorian Embassy by British police in April last year and subsequently slapped with 18 charges under the US Espionage Act, which could see him sentenced to up to 175 years in prison.

The Australian journalist and whistleblower had, for the seven years prior, been living in the London embassy, where he had sought asylum after skipping bail in relation to a Swedish sexual assault investigation, which he and his lawyers maintain was politically motivated (and which was later dropped).

Now, Assange’s fate is hanging in the balance in the Woolwich Crown Court with Judge Vanessa Baraitser hearing arguments for and against his extradition. The hearing is expected to last until Friday.

Also on rt.com ‘Journalism is not a crime’: Australian MP says charges against Assange must be dropped after visiting him in UK prison

Assange’s lawyers have long argued that he would not receive a fair trial in the US and that the case against him is purely political, amounts to criminalizing the legitimate activities of journalists, and poses a threat to free speech.

WikiLeaks was founded in 2006 but came to prominence in 2010 when it published a classified video showing a US military helicopter killing around 12 people, including two Reuters journalists.

The video was part of a massive cache of military material leaked to the whistleblower site by former army intelligence analyst Chelsea Manning, who served seven years in prison before her 35-year sentence was commuted by former President Barack Obama in 2017.

Read more:   EU lost over €100bn because of its own anti-Russia sanctions – Lavrov

Manning was jailed again in 2019 (and remains behind bars) for refusing to testify against WikiLeaks, saying she would rather “starve to death.”

Assange’s critics say that his activities do not amount to journalism and pose a threat to the national security of the US. During the 2016 US presidential election, WikiLeaks angered the US establishment, releasing leaks from the Democratic National Committee (DNC) which showed party leaders trying to restrain Bernie Sanders. Some Democrats claimed the publication was harmful to Hillary Clinton’s bid for the presidency and accused Assange of working with Russia to undermine her campaign. (RT)