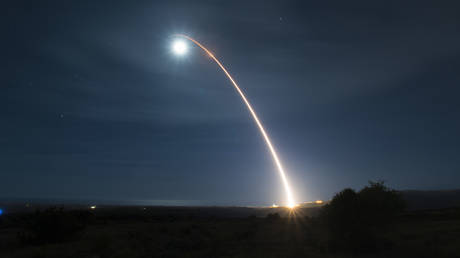 This US Air Force photo shows an unarmed Minuteman III intercontinental ballistic missile as it launches during a developmental test at 12:33 a.m. Pacific Time on February 5, 2020, at Vandenberg Air Force Base, California. © Clayton WEAR / US AIR FORCE / AFP

The United States accounted for over half of the total nuclear weapons spending in 2020. The $37.4 billion that went toward its nuclear arsenal beat the combined expenditure of the eight other nuclear powers, a new report says.

The majority of that whopping sum, roughly 5% of the country’s total military spending last year, was disbursed as defense contracts to private corporations. Nearly a third, around $13.7 billion, was awarded to contractor Northrop Grumman, which is building a new intercontinental nuclear weapons system.

According to the report, titled ‘Complicit: 2020 Global Nuclear Spending’ and published on Monday by advocacy group International Campaign to Abolish Nuclear Weapons (ICAN), nuclear-armed countries collectively spent $72.6 billion on these weapons last year – an uptick of $1.4 billion on the previous year.

The US spent more than three times the figure dished out by its closest competitor, China ($10.1 billion). Russia was listed in third place at $8 billion, while the UK spent around $6.2 billion, the report said.

The ICAB report calculated that nuclear-armed states, which also include France, India, Israel, Pakistan, and North Korea, together spent more than $137,000 per minute on atomic weapons as the pandemic raged in 2020.

“There’s always more (nuclear spending) out there… even more still lurking in the shadows,” Susi Snyder, managing director of the project ‘Don’t Bank on the Bomb’ and co-author of the report, told The Intercept. Snyder told the outlet that “governments, especially US, UK, (and) France are always demanding ‘transparency’… yet they do not hold themselves to the standards they demand of others.”

US @StateDept budget testimony yesterday, asks $10 billion for global health. That’s less than 1/3 of what the US spent on #NuclearWeapons last year. https://t.co/dXqrodXO2J. #nuclearban

More than 20 nuclear weapon developers were found to have profited from existing or new contracts – with 11 Western companies bringing in $27.7 billion in new or modified nuclear-weapons contracts by themselves, the report notes.

For every dollar spent last year lobbying governments to raise spending on defense, $236 came back to companies in nuclear weapons contracts, the report states.

Companies even lobbied to authorize defense funding in Covid-19 relief bills. For instance, the report notes that much of Boeing’s defense lobbying activities were bundled in with lobbying around the US’ $2.2 trillion CARES (the Coronavirus Aid, Relief, and Economic Security Act) economic stimulus plan. (RT)