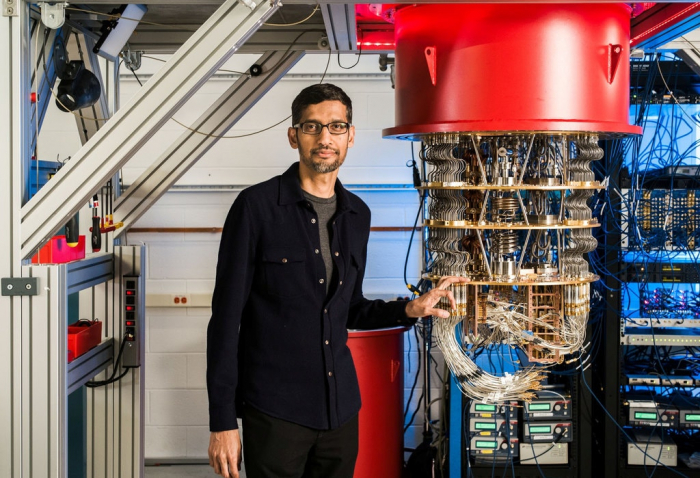 The question isn’t so easy to answer. Also, Google’s founders stepped away just as their company enters turbulent adulthood.

Each week, we review the week’s news, offering analysis about the most important developments in the tech industry.

Hello, my name is Cade Metz. I cover artificial intelligence, self-driving cars and other emerging technologies for The New York Times. Today I’m here to give you the lowdown on the latest tech news.

As we approach the end of the year, there are a few important questions to ponder: What does the future hold for Google now that its founders have stepped down? Will Elon Musk pay for his “pedo guy” tweet? And what on earth is a quantum computer?

Last month, at a lab in Santa Barbara, Calif., a team of Google researchers reached a milestone that some compared to the first flight at Kitty Hawk. They reached “quantum supremacy,” building a quantum computer that needed only 3 minutes 20 seconds to perform a calculation that today’s computers couldn’t finish in 10,000 years.

It was one of the most interesting — and perhaps one of the most important — technological developments of the year. The trouble is that no one can really explain what it is that Google built, at least not in a way that mere mortals can understand.

The first thing you need to know is that a quantum computer is experimental technology. It won’t be ready for prime time for several more years, if not more. But experts believe it will eventually make today’s computers look like toys, handling tasks that would never be possible with traditional machines.

It will do this by harnessing the power of quantum mechanics, which is the strange behavior exhibited by things like electrons or particles of light or exotic metals cooled to several hundred degrees below zero.

Describing this strange behavior is difficult, because it is unlike anything any of us have ever experienced. If any of us actually looked at the fundamental building block of a quantum computer, called a qubit, it would cease to be a qubit.

We asked several top experts to describe a quantum computer in terms anyone can understand. And because attention spans are short these days, we asked them to pack their explanation into 280 characters, or the length of a tweet.

Marissa Giustina, Google quantum electronics engineer:  Quantum computation is about building and controlling a “programmable molecule,” then using it to simulate and ask questions of nature.

Hartmut Neven, founder of the Google quantum lab:  Digital computers use Boolean logic — the language of 0s and 1s. A quantum computer replaces Boolean logic with quantum law. As a result, we get a richer set of operations. That allows us to do certain tasks with fewer steps.

Greg Kuperberg, professor of mathematics at the University of California, Davis:  A quantum computer is an exotic device that can run algorithms boosted with quantum randomness. For selected questions, a modest array of slow, large qubits will outsmart the entire Earth paved with classical computer chips.

Dorit Aharonov, computer science professor at Hebrew University in Jerusalem, who specializes in quantum computing:  A qubit can be 0 and 1 at the same time; n qubits can remarkably explore exponentially many computational paths at once. By cleverly designing cancellations between these paths, such that only correct answers remain, we can sometimes gain computational power beyond any imagination.

David Reilly, principal researcher and director of the Microsoft quantum computing lab in Sydney, Australia:  A quantum machine is a kind of analog calculator that computes by encoding information in the ephemeral waves that comprise light and matter at the nanoscale. Quantum entanglement — likely the most counterintuitive thing around — holds it all together, detecting and fixing errors.

Daniel Lidar, professor of electrical and computer engineering, chemistry, and physics and astronomy at the University of Southern California, with his daughter Nina, in haiku:

solve some problems much faster

but are prone to noise

to the right answer

and boosts the right ones

Scott Aaronson, professor of computer science at the University of Texas at Austin:  A quantum computer exploits interference among positive and negative square roots of probabilities to solve certain problems much faster than we think possible classically, in a way that wouldn’t be nearly so interesting were it possible to explain in the space of a tweet.

Alan Baratz, executive vice president of research and development at D-Wave Systems:  If we’re honest, everything we currently know about quantum mechanics can’t fully describe how a quantum computer works. What’s more important, and even more interesting, is what a quantum computer can do: A.I., new molecules, new materials, modeling climate change …