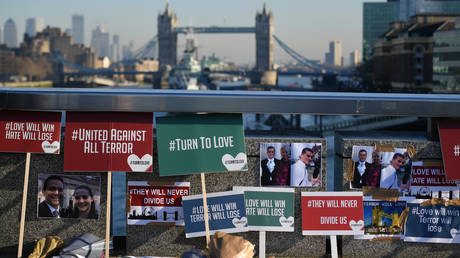 Banners and pictures are placed on London Bridge in memory of the victims of attack in central London on December 12, 2019. © AFP / DANIEL LEAL-OLIVAS

New legislation that will include terrorists having to undertake lie detector tests has provoked anger on social media with accusations the government isn’t taking the issue seriously.

The new measures which will be published by the Home Secretary Priti Patel in a new bill over the next two months, and also include a 14-year jail term for convicted terrorists, come in the wake of the London Bridge terror attack last November that left two people dead.

The ‘polygraph testing’ on offenders could be used on terrorists once they have been released, as part of a whole range of monitoring procedures. Lie detector tests have been used on sex offenders by UK police since 2007. The results are not admissible as evidence in court, but can be used as a reason to bring forward further investigations.

The inclusion of lie detector testing in an attempt to “toughen up” UK counter-terror laws has prompted outrage online with many people suggesting PM Boris Johnson’s administration are being weak on terrorists.

TV presenter Piers Morgan – no stranger to voicing his views on controversial subjects – was seemingly unimpressed with the prospect of polygraph testing terrorists, tweeting”What? Is this a joke?” Others sarcastically suggested that the worst terrorists should be made to write 100 lines: “I promise not to be bad again.”
(RT)