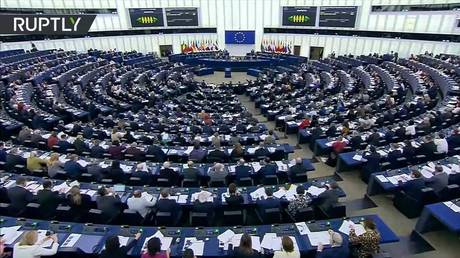 On Wednesday, members of the European Parliament adopted a resolution naming Russia as a state sponsor of terrorism. The move follows a similar NATO parliamentary committee vote just two days earlier, in response to demands from the Ukrainian delegation.

With NATO, there could have been no other outcome, given that the bloc has been justifying its continued post-Cold War existence by constantly playing up the need to counter Moscow. And would be redundant without the promotion of a “Russian threat.”

But what exactly is the European Parliament’s endgame?

The bloc doesn’t even have an actual “state sponsor of terrorism” designation, and the resolution points that out. “The EU maintains a list of persons, groups and entities involved in terrorist acts which are subject to sanctions but the current legal framework, unlike those of countries such as the United States and Canada, does not provide for the designation of a state as a sponsor of terrorism,” one of its lines reads. The resolution is not legally binding, and Russia has already been hit with an unprecedented number of sanctions, with more being added on constantly. So, what does Brussels hope to accomplish, beyond adding to a Western-led PR effort to conflate “Russia” and “terrorism” in the minds of the public? 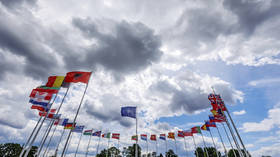 The Parliament has spent the past few years – long before the Ukraine conflict went red hot – referring to Russia alongside actual terrorist groups like ISIS. “Propaganda pressure on the EU from Russia and Islamic terrorist organisations is growing, say Foreign Affairs Committee MEPs in a resolution,” Strasbourg announced back in October 2016, for example. It’s a particularly egregious commingling of “terrorism,” “ISIS,” and “Russia,” since Moscow at the time was at the very forefront of the fight against the Islamic State hotbed in Syria at the invitation of President Bashar Assad, in the wake of Washington’s training and equipping of “Syrian rebels,” some of whom ended up joining an actual jihadist group: Al Qaeda.

Wednesday’s resolution inverts that history by labeling the government of Syria as the terrorists. “Russia has supported and financed terrorist regimes and organisations, notably the Assad regime in Syria, to which Russia has supplied arms and in whose defence it has carried out deliberate attacks on the Syrian civilian population,” according to the resolution.

Similarly, the EU had a whole eight years to denounce the Western training, equipping, and funding of Azov fighters – actual non-state violent actors in Ukraine, previously described as “neo-Nazis” by the Western press – before they were folded into the Ukrainian army and rebranded as freedom fighters against Russia. Democratic Congressman Ro Khanna even pointed out back in 2018 that, for years, the US congressional funding bill had been stripped of language banning the supply of American weapons and funding to “a controversial ultranationalist militia in Ukraine that has openly accepted neo-Nazis into its ranks.”

While the EU has failed to do anything to prevent or stop the conflict – for instance, by refusing to cut off its own cheap energy supply from Russia and insisting instead that Kiev and its primary benefactor, Washington, work things out with Moscow – the resolution doubles down on the EU officials’ anti-Russian rhetoric. “Russia’s attempt to leverage energy exports as a tool of geopolitical coercion amounts to using energy supplies as a weapon,” it reads, ignoring the fact that it’s EU officials who have been bragging about cutting off their own energy supply “for Ukraine.”

“The damage to the Nord Stream 1 and 2 pipelines on 26 September 2022 resulted in major gas leaks in the Baltic Sea, which also constitutes an environmental attack on the EU,” the resolution also says, implying without evidence that it was indisputably Russia who blew up its own energy infrastructure rather than, say, Western interests seeking to secure EU dependency on their own gas sales. 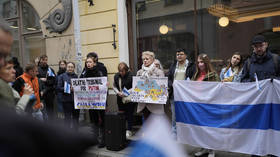 The bloc-level resolution is non-binding, meaning it’s largely a symbolic move. French President Emmanuel Macron has repeatedly rejected calls from Ukrainian President Vladimir Zelensky to pin a similar designation on Russia. So has US President Joe Biden, who admitted that the move could backfire with implications for America’s support of Ukrainian fighters.

America’s own past use of the ‘terrorism’ designation tends to align conveniently with its own foreign-policy agenda. The Iranian Mujahideen-e-Khalq (MeK) opposition group was conveniently delisted from Washington’s official list of terrorist organizations around the time that several high-profile US officials started visiting the group while talking up Iranian regime change. When former President Donald Trump was trying to claim a victory in securing Middle East peace with his Abraham Accords, he dangled the carrot of a terror-sponsoring state delisting in front of Sudan if it made nice with Israel. Cuba was taken off the list by former President Barack Obama as he pursued a policy of normalization with Havana, but Trump reinstated the designation, appealing to his voter base.

So now it’s apparently the EU’s turn to abuse the ‘terrorism’ label and deflect attention from the bloc’s own poor choices, under which its citizens continue to suffer.