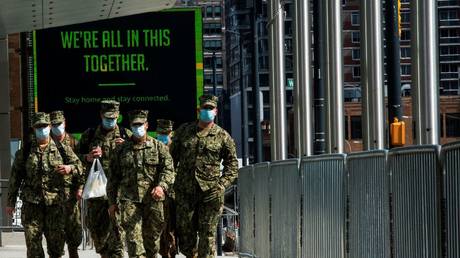 US military intelligence tried to raise the alarm about the coronavirus epidemic in China when it was still embryonic in November, inside sources claim – raising questions of what they knew and who ignored, or squashed the report.

Not only had the coronavirus epidemic begun spiraling out of control in Wuhan by November 2019, but military analysts were already warning it “could be a cataclysmic event” for both China and the US, four sources familiar with the briefings told ABC on Wednesday. Analysts at the National Center for Medical Intelligence, a subsidiary of the Pentagon’s Defense Intelligence Agency, had been trying to alert Pentagon and Donald Trump administration officials of the looming catastrophe for months before the country finally took action, the sources claim.

Based on detailed analysis of intercepted communications and satellite imagery, the NCMI reportedly projected that a virulent contagion already getting out of hand in Wuhan would soon be menacing not just China but US troops stationed nearby. Most intriguingly, the sources hint that analysts may have begun looking into the unfolding epidemic even earlier, given the timeline for when the material crossed President Trump’s desk. By the time the agency’s warnings made it into the President’s Daily Brief in early January, they would have had to undergo “weeks of vetting and analysis.”

Read more:   Lukashenko: OSCE should not turn a blind eye on the Karabakh conflict

Also on rt.com The US was named the best equipped country to deal with a pandemic not a year ago — what happened there?

“The timeline of the intel side of this may be further back than we’re discussing,” one source told ABC, suggesting “preliminary reports from Wuhan” dated back even earlier than the NCMI report, which was widely released among the intelligence community before Thanksgiving and spawned several intel community bulletins that supposedly outlined Beijing’s own responses to the growing epidemic. China knew the coronavirus had gotten out of control, the sources allege, but tried to keep it under wraps – a claim the Trump administration has echoed repeatedly in the months since then. (RT)