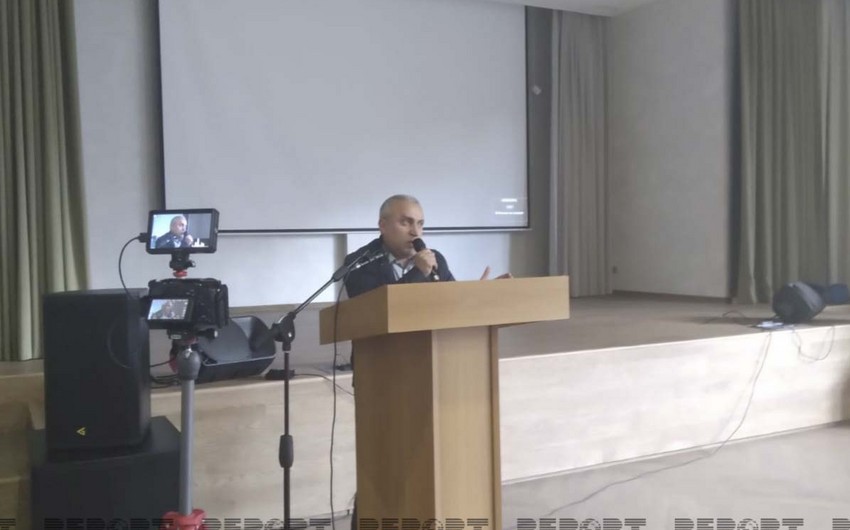 A conference on the veterans of the war against separatism in eastern Ukraine and IDPs, dedicated to Defense Day, was held in the city of Ivano-Frankivsk, Ukraine.

As Report’s Eastern Europe bureau informs, the conference focused on the solution of acute social problems of war veterans and IDPs through the help of IT technologies, as well as examples of the former Karabakh conflict and the liberation of Azerbaijani lands to this effect were citied.

Chairman of the Ivano-Frankivsk Congress of Azerbaijanis Matlab Najafov congratulated the participants of the conference, organized by IT Strana, Smart Ukraine Automation, and Ivano-Frankivsk Veterans Union, on the holiday and spoke about the work done by Azerbaijan for IDPs throughout the 30-year-long occupation period.

“On these days last year, Azerbaijan’s courageous army under the command of the Supreme Commander-in-Chief ended the 30-year-long occupation within 44 days and liberated Nagorno-Karabakh and surrounding areas from occupation. As Azerbaijanis, who are citizens of Ukraine, we feel the suffering of the country from the war in the east as well as the plight of the war veterans. We believe that Ukraine will soon liberate its lands from occupation and put an end to these problems,” he said, referring to the Second Karabakh War.

Dmitri Vyalkov, Director of IT Strana, Ivan Porokhnavets, Director of Smart Ukraine Automation, Sergey Fitzak, Director of Softjorn-UKRAINE IT, Taras Maslyak, a war veteran, volunteer, and Chairman of Podolskaya Gora organization, and others spoke at the conference.

Local officials Aleksandr Yaroshuk, Aleksandr Popalinets, Petr Shkutyak, and others also addressed the event. The conference was supported by the PODILSKA GORA association, which supports establishing farms for war veterans via smart systems.