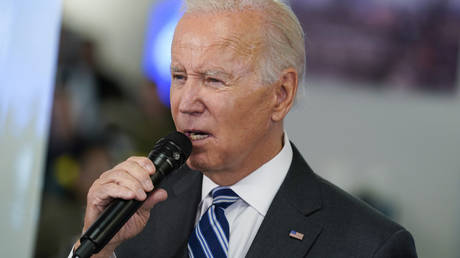 Western leaders have condemned Russian President Vladimir Putin for signing accession treaties on Friday to start the process of bringing the two Donbass republics and Zaporozhye and Kherson Regions into the Russian Federation. US President Joe Biden vowed fresh sanctions and more aid for Kiev.

The four former Ukrainian territories held referendums between September 23 and 27 on joining Russia, with the measures passing with overwhelming support. The Donetsk and Lugansk People’s Republics in Donbass have been regarded by Russia as independent states since February, while Putin recognized the independence of Kherson and Zaporozhye on Thursday.

After the Russian president signed accession treaties with the heads of all four territories on Friday, condemnation poured in from Western leaders.

“The United States condemns Russia’s fraudulent attempt today to annex sovereign Ukrainian territory,” read a statement from Biden. “The United States will always honor Ukraine’s internationally recognized borders. We will continue to support Ukraine’s efforts to regain control of its territory by strengthening its hand militarily and diplomatically.”

Biden added that the US would sanction anyone providing “political or economic support” to “Russia’s phony claims of annexation,” and that he would sign a bill providing an additional $12 billion to prop up Ukraine’s government and military.

“The UK will never accept the regions of Donetsk, Lugansk, Kherson and Zaporozhye as anything other than Ukrainian territory,” British Prime Minister Liz Truss said in a statement. “We will not hesitate to take further action, including imposing more sanctions to cripple Putin’s war machine,” she added.

Vladimir Putin is once again violating international law with his threats to annex more of Ukraine. We will not hesitate to take further action, including imposing more sanctions to cripple Putin’s war machine. We will ensure he loses this illegal war. pic.twitter.com/LhFvzdlx80

European Commission President Ursula von der Leyen announced that “the illegal annexation proclaimed by Putin won’t change anything,” and that all territories “are Ukrainian land.” The bloc’s chief diplomat, Josep Borrell, wrote that the accession of these lands “is a major breach of international law and violation of [the] UN Charter.”

A similar statement came from the foreign ministers of the G7 states, who declared that they would never recognize the entry of the four regions into the Russian Federation. (RT)