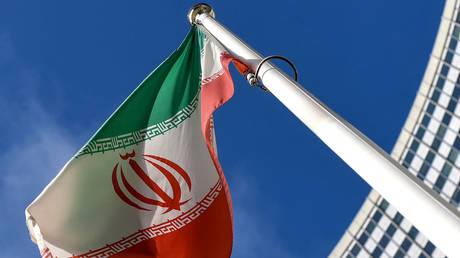 The Iranian national flag is seen outside the International Atomic Energy Agency (IAEA) headquarters during the agency's Board of Governors meeting in Vienna on March 1, 2021. © AFP / Joe Klamar © AFP

Western states have ditched a planned resolution criticizing Iran at the UN’s nuclear watchdog, after Tehran allowed some monitoring of its atomic dealings but did not commit to answering key questions on its nuclear operations.

On Monday, the chief of the UN’s International Atomic Energy Agency (IAEA), Rafael Grossi, shared that he had failed to obtain a “promise” from Tehran that would explain the traces of uranium found at several old sites.

Grossi stated, however, that he needs to “have a clear conversation with the new [Iranian] government about this.”

Despite a lack of commitment from Tehran to explain the uranium issue, the US, France, UK, and Germany decided to scrap pursuing a resolution at the IAEA’s meeting later this week – likely in an effort to avert tensions from re-escalating with their Iranian counterparts, which could stall the nuclear deal negotiations.

On Sunday, the Atomic Energy Organization of Iran granted the IAEA permission to monitor cameras at its nuclear facilities, which Tehran has previously not permitted. A joint statement issued after the agreement hailed the progress between the two partners as having “reaffirmed the spirit of cooperation and mutual trust” and “emphasized on the necessity of addressing the relevant issues in a constructive atmosphere.” (RT)