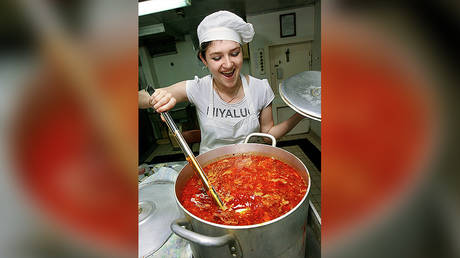 Beware! While grilled meat, potato pancakes and beetroot soup might sound like a harmless festive spread, in the wrong hands they could actually be secret weapons in Russia’s cultural war on the West.

That’s according to the Hybrid Warfare Analytical Group (HWAG), a well-funded Ukrainian organization dedicated to “countering disinformation and propaganda.” On Tuesday, it published a list of “culinary deceptions,” dishes claimed by Russia but supposedly originating elsewhere, “because food can be an instrument of hybrid warfare as well.”

Among the items listed are summer favorites kholodnik, a chilled soup with chopped egg, and shashlik, meat roasted over hot coals, as well as potato pancakes and stuffed vine leaves. The dish that has Russians seeing red, however, is borsht – or beetroot soup. A beloved staple across Eastern Europe, its origins are notoriously murky, with every grandmother in the region perfecting her own variation.

Read more:   Japan to pay citizens up to $19k to settle around crippled Fukushima nuclear plant

Accusing Russia of having “culturally appropriated” the recipe, the group insists it is a Ukrainian invention, and should only be spelled “borsh,” as is done in that country. An article on HWAG’s website goes on to say it was made “in Ukraine back in the Middle Ages, when Russia as a state didn’t even exist.” The fact that Ukraine didn’t come into being as a nation until 1919, after lengthy spells as a core part of the Russian Empire, didn’t seem to bother the authors of the piece.

Thread: 🤔We have prepared the most mouth watering article for you about… culinary deceptions: https://t.co/eBk41YeZZK😳Or rather, top 8 dishes culturally appropriated by Russia, because food can be instrument of hybrid warfare as well. pic.twitter.com/EHiLcbrKia

Also on the list is a well-known and hearty meat cutlet, stuffed with butter and herbs, but supposedly called a “Chicken Kyiv.” The name, referencing many Ukrainian’s preferred term for their capital city in English, will be unfamiliar to many but, according to the lobby group, “only those who struggled with geography would believe the dish originated in Russia.”

Among those who apparently need to invest in a map is popular Ukraine-based tourist website KyivGuide. Not only does it refer to Chicken Kiev with its traditional spelling, but it says “it would be logical to assume that the name of the dish originates from the name of the capital of Ukraine – Kyiv, but it does not.” Instead, the website chronicles how wealthy Russians sent their chefs to France to master the culinary arts, with the Chicken Kiev arising from the resulting fusion of tastes and techniques. (RT)