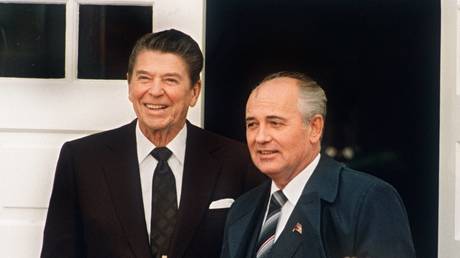 The West’s insistence that it won the Cold War and was entitled to the spoils at the expense of Russian interests is at the root of the ongoing crisis in Ukraine, the country’s exiled opposition leader has said.

Viktor Medvedchuk was forced to leave his home nation under the threat of prosecution for alleged treason. His Opposition Bloc – For Life party had the biggest faction in the Ukrainian parliament and advocated reconciliation with Russia. However, the government of President Vladimir Zelensky cracked down on it and ultimately forced many of its members into exile or silence.

In an article published by Russian newspaper Izvestia on Monday, Medvedchuk analyzed the causes of the current crisis, arguing that the origin of the conflict lies in the way that the end of the Cold War is perceived by Washington and Moscow.

“The West definitely considers itself as a winner and Russia as a defeated party,” he said. Consequently, it considers ex-Soviet territories as “legitimate prey for the US and NATO” under the “woe to the conquered” principle.

From Moscow’s standpoint, it simply relinquished confrontation when it decided against pursuing communism. Since the 1990s, it had sought friendly relations with Western nations, as well as economic and political integration into the EU, Medvedchuk wrote.

The US plan, as evidenced by the expansion of NATO in Europe despite the objections of Moscow, was at odds with opening the door to its Cold War opponent. Ultimately, it derailed EU-Russian engagement, he argued.

Conflicts like the Balkan wars are further evidence that the West had moved to gobble up the former Eastern Bloc, he continued, since they helped to “make it easier for the winner to take it over.” 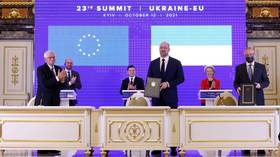 The West targeted Ukraine for absorption and saw the country as part of its rightful prize, but a lot of resistance had to be overcome in order to split it from Russia, considering Kiev’s historical ties with Moscow, and the economic interest in maintaining good relations, Medvedchuk explained.

Kiev antagonized the eastern part of the country, which was both economically stronger and more pro-Russian than the nationalist lands in the east, he suggested. And even then, both Zelensky and his predecessor, Pyotr Poroshenko, had been elected on a peace platform only to become “war party” politicians after taking office.

The current conflict can be resolved only if pro-peace politicians are allowed to make their case, and Western nations must recognize that Russia has legitimate interests in Ukraine. Otherwise, it will “grow further, spilling over to Europe and other countries,” and has the potential to escalate into a nuclear war, he warned. (RT)