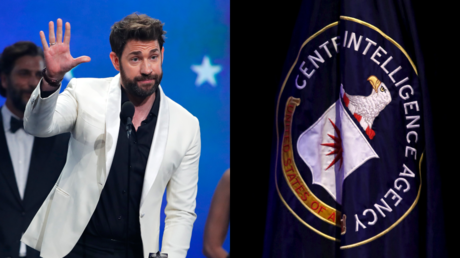 Americans should be thankful for the services the CIA provides, ‘Jack Ryan’ actor John Krasinski says. After all, without the agency, who would prop up foreign dictators, stage coups and ‘play’ with mind-control drugs?

In three decades between the publication of ‘The Hunt for Red October’ in 1984 and his death in 2013, Tom Clancy pumped out more than 20 books, giving lots of material for spy agency fanboys.

At long last though, there’s someone out there who gets even more tumescent at the thought of clandestine criminality than Clancy himself. Actor John Krasinski – star of ‘The Office’ and now ‘Tom Clancy’s Jack Ryan’ – came out and told reporters before the release of season 2 that “The CIA is something that we should all not only cherish, but be saying thank you for every single day.”

“the CIA is something that we should all not only cherish, but be saying thank you for every single day.”

impossible to listen to this guy for 5 seconds without snort laughing pic.twitter.com/NptG4QkfIB

Unlike the FBI, the CIA is not tasked with fighting crime in America. It doesn’t spend its time tracking murderers and busting pedophile rings. Instead, the agency often operates in the shadows abroad, and while its officers do foil terror attacks and intercept shipments of weapons of mass destruction, the agency has also been referred to by journalist Douglas Valentine as “the organized crime branch of the US government.”

Among them are more than 50 attempted coups. Some, like the 1961 ‘Bay of Pigs’ invasion of Cuba were abject failures. Others, like the overthrow of democratically-elected Chilean president Salvador Allende in 1973 were successful, much to the horror of the tens of thousands of Chileans who were arrested, tortured, or extrajudicially murdered by the dictatorship of Augusto Pinochet that followed.

If coups d’etat aren’t your thing, then how about wacky mind control experiments? Maybe one can be thankful for MKULTRA, a Cold War-era program that saw human guinea pigs, some of them unconsenting, subjected to hypnosis, psychoactive drugs, sensory deprivation and torture, all in the name of forcing confessions through mind control. The program was supposedly shut down in 1973. The agency had failed to control the human mind, yet it apparently succeeded in engineering six remote-control dogs.

Read more:   Azerbaijan leading in Europe for number of youth

The agency’s worst excesses were not abandoned after the fall of communism either. In the aftermath of the 9/11 attacks, the CIA kidnapped and tortured terror suspects around the world, sometimes holding them for years on end with no trial. Current director Gina Haspel is accused by rights groups of running at least one ‘black site’ in Thailand, where detainees were reported to have been held in conditions compared to a medieval “dungeon,” and at least one inmate was waterboarded almost to death.

Many of those abducted were done so based on phony intelligence, or even because they shared a name with a known suspect, former CIA officer Amaryllis Fox recalled in her memoir, published last month. Agency higher-ups knew about the mistaken identities, but were unwilling to fix the problem, Fox recounted. (RT)