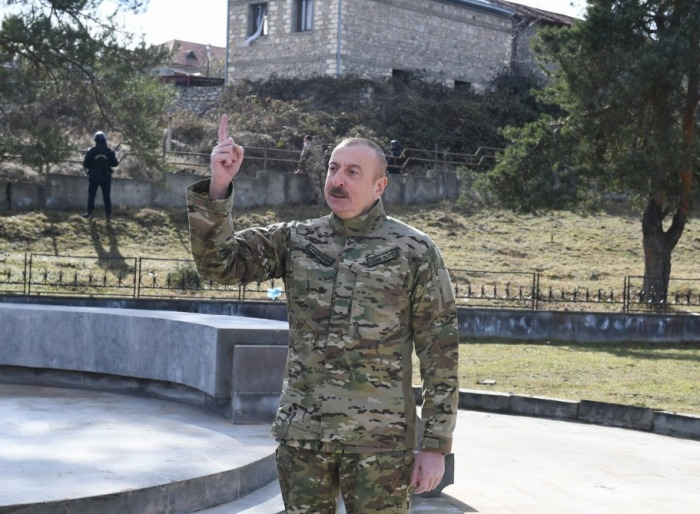 Shusha is our historical city, and we have returned to this city. If the Armenians considered this city their own, then why didn’t they create anything there in 28 years? Why couldn’t they save the historical sites of Shusha? All springs have dried up. There was a spring in every neighborhood, but none of them has water now. Okay, if this is your city, then why did you drain the springs? All historical sites have been razed to the ground. If this is your city, why did you destroy the sites?

President Ilham Aliyev made these remarks receiving Aydin Karimov in a video format due to his appointment as special envoy of the President in Shusha district.

“If Armenia declared that it had liberated Shusha, then who did it liberate it from? From the civilian population? From Azerbaijanis? Okay, if you thought you had liberated it, then why did you destroy the buildings? If this is an Armenian city, then why did you raze it to the ground? Not only our mosques were destroyed there but also all the buildings. Only the “Khrushchev-era” apartment blocks built in Soviet times remained, grossly violating the architectural ensemble of Shusha, and this is where they lived. While in Shusha, I saw this destruction with my own eyes. It was as if a wild tribe swept through the city – the vandals brought Shusha to this state. And then they say that Shusha is an Armenian city. This is another Armenian lie, yet another falsification! Their entire history is built on falsification and mythology. Together with their patrons in various countries, they created fake history for themselves, and this falsification continues to this day. See what Armenian representatives and their patrons abroad have to say about the liberation of Shusha. They say that Shusha was allegedly handed over to us just like that, without a fight, that the Armenians left Shusha of their own free will. This is a blatant lie! The Shusha operation will forever remain in the souls of the Azerbaijani people. The bright memory of our brave sons who became martyrs in the battles for Shusha will always live in our hearts. During the liberation of Shusha, Azerbaijani soldiers and officers displayed heroism, professionalism, physical strength and high national spirit. From the direction of Dashalti and other directions, climbing the steep cliffs, destroying the invaders, they liberated Shusha, fought practically with their bare hands – bayonets, knives, light weapons against guns and tanks. During the Shusha operation, hundreds of invaders were killed. We know their number. No matter how hard the Armenian leadership tries to hide it from their own people, they will not succeed. It was the brave sons of Azerbaijan who destroyed hundreds of invaders defending Shusha. How can we ever say that Shusha was handed over to us? Secondly, can anyone present such a city to anyone? We liberated Shusha from the enemy, from enemy captivity at the cost of heroism, life and blood of our brave sons. From now on, Shusha will live forever, we will cherish and protect Shusha,” said President Aliyev.

Biden administration will NOT sanction Saudi Prince over Khashoggi killing, but will use ‘more effective’ tools – White House