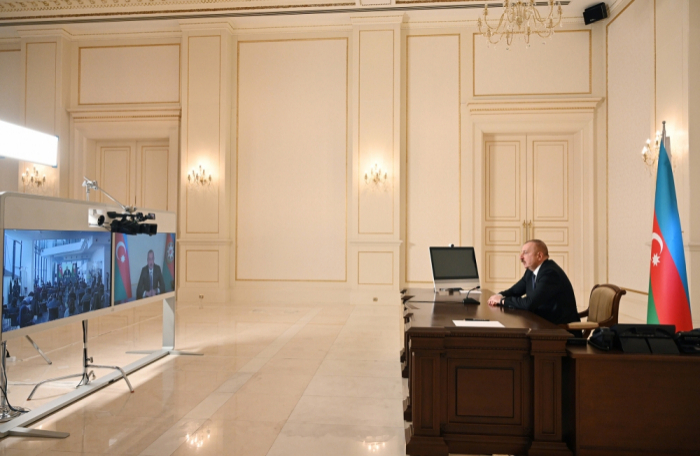 “According to our information, after the end of the hostilities, on November 20, a group of more than 60 people was sent from the Shirak region of Armenia, the city of Gyumri and surrounding areas. It is not clear how this group passed through the Lachin corridor and how they came to the territories controlled by the Azerbaijani Army,” said President Ilham Aliyev at a press conference for local and foreign media representatives, answering the question from Ukraine-24 TV channel.

“It is selfish to make territorial claims to Turkey,” Ilham Aliyev said, speaking about the issue of prisoners of war.

“After the military operations, we found out that there were Armenian armed groups in the depths of the rear line. According to the initial information, these people are the ones who could not get out of the siege. Assuming that they were missing, the Azerbaijani military, along with a peacekeeping mission, tried to help and repatriate them. However, it turned out that it was not the case. It turned out that this is a provocative group that attacks both our servicemen and civilians. As a result of these provocations and terrorist acts, four of our servicemen and one civilian, a representative of the mobile operator were killed. The man, who was going to Shusha, was ambushed and several people were injured.

The President noted that we naturally conducted a counter-terrorist operation, as a result of which several terrorists were neutralized and more than 60 terrorists were detained. “Today, they are trying to call them prisoners of war. I think they are deliberately distorting the essence of the issue. One cannot be a prisoner of war 20 days after the end of the war. We have returned all the prisoners of war, that we had. In fact, we returned them before our captives were returned. These people do not fit into that category. These are terrorists and saboteurs. Any speculation by Armenia or other countries is unfounded,” the head of the state said.