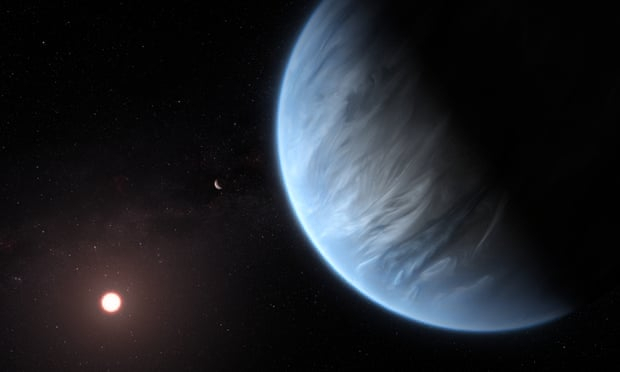 A faraway planet in the constellation of Leo has been named the most habitable known world beyond the solar system after astronomers detected water vapour in its atmosphere, the Guardian reports.

It is the first time a planet in its star’s “Goldilocks zone” – where the temperature is neither too hot nor too cold for liquid water to exist – has been found to bear the life-sustaining substance in the blanket of gases that surround it.

The discovery has raised hopes that the planet, and similar worlds spotted in recent years, not only have conditions that can be suited to life, but in some cases may host living organisms.

“This is the first potentially habitable planet where the temperature is right and where we now know there is water,” said Angelos Tsiaras, an astronomer at University College London. “It’s the best candidate for habitability right now.”

The planet, named K2-18b, was first spotted in 2015 by Nasa’s Kepler space telescope. Roughly twice as big as Earth and eight times as massive, it orbits a cool red dwarf less than half the size of the sun, 110 light years away.

Red dwarfs produce far less heat than the sun, but K2-18b is warmed to about 10C (50F) by circling close to its star. From a mere 14m miles out, a sixth of the distance from the Earth to the sun, the planet completes an orbit every 33 days, making a year there pass as swiftly as a month on Earth.

Read more:   US issues new sanctions as Iran warns it will step back from Nuclear Deal

Today’s technology is too feeble to take photos of the surfaces of such distant worlds, and they are too far away to send probes to. But space-based telescopes can glean some information about the atmospheres on alien planets.

The UCL team turned to Nasa’s veteran Hubble space telescope, which observed K2-18b in the two years after its discovery. In particular, they analysed measurements of starlight from the red dwarf as the planet wandered across its face on eight separate occasions.

The data revealed that as K2-18b crossed in front of its star, wavelengths of light that are absorbed by water suddenly dropped off, and then rose again as the planet moved on. The effect is seen as a smoking gun for water vapour in the planet’s atmosphere.

“To our great surprise we saw a pretty strong signature of water vapour,” said Giovanna Tinetti, a member of the UCL team. “It means first of all that there’s an atmosphere, and second that it contains a significant amount of water.”

Nothing has driven the search for life elsewhere more than the presence of water. On Earth, there is no life without the substance, and the same is expected on other planets, at least for life as we know it.

The discovery of water vapour on K2-18b does not prove there is water on the surface. But it ticks one more box in the hunt for worlds where the conditions are ripe for life. “We don’t know any other planet with the right temperature that has water in its atmosphere,” Tsiaras told the Guardian. According to the report in Nature Astronomy, K2-18b has between 0.01% and 50% water in its atmosphere.

In astronomy jargon, K2-18b is a super-Earth, putting its size between Earth’s and Neptune’s. But rather than Earth’s twin, K2-18b is more like our home planet’s cousin. It is two-thirds the density of Earth and though it may have a rocky surface, it could equally be a water world.

Humans would not fare well on the planet. If it has a hard surface, it would be impossible to stand. With gravity eight times stronger than on Earth, the average human would weigh half a tonne. Added to that are intense UV rays that would drive cancer-causing mutations. But get around these and the view, at least, might be pleasing to the eye: wispy clouds, a giant red sun, and an inner planet that rises like Venus. As Ingo Waldmann, a researcher on the team, said: “It’s maybe not quite your vacation destination just yet.”

Ryan Cloutier at the Harvard and Smithsonian Center for Astrophysics said an independent analysis, or fresh observations, would be valuable to confirm the detection of water vapour. But he added that the apparent presence of water was promising for K2-18b’s habitability.

“It’s a good sign,” he said. “Overall, the presence of water in its atmosphere certainly improves the prospect of K2-18b being a potentially habitable planet, but further observations will be required to say for sure.”

Astronomers now hope to study more super-Earths for signs of water in their atmospheres. That work is due to be transformed in coming years with the launch of Nasa’s James Webb space telescope in 2021 and the European Space Agency’s Ariel mission in 2028. Observations from these telescopes should reveal more about the makeup of atmospheres on distant worlds, including the presence of methane and other gases that could be direct signs of life.