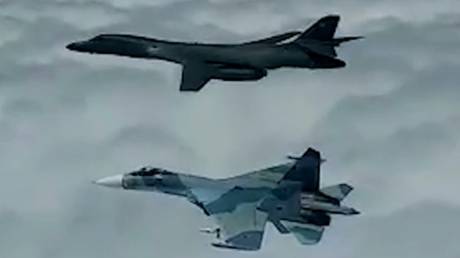 Russian jets were scrambled to intercept US B-1B Lancer strategic bombers, which approached the country’s airspace over the Black and Baltic Seas, with the high-altitude action captured on video.

The American nuclear-capable warplanes heading in the direction of Russian airspace were first tracked by radar, before the Sukhoi Su-27P and Su-30SM were sent to greet them in the skies above neutral Black Sea waters.

The jets approached the US bombers at a “safe distance,” with the move resulting in the B-1Bs reversing their course, the Defense Ministry said as it released the footage. (RT)