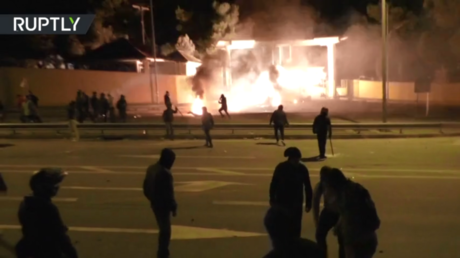 Scores of angry Greeks clashed with police on Wednesday night as violent protests continued over plans to build a new detention center for irregular migrants on the island of Lesbos, with dozens reported injured.

The Greek government plans to build new camps for refugees in response to overcrowding on Lesbos and four neighboring islands, Samos, Chios, Leros and Kos. Local residents were enraged with the news and used stones, sticks and fire to express their anger. The Greek police used tear gas and rubber bullets against the demonstrators on Wednesday night as rioting entered its third consecutive night.

The protesters targeted several locations, including a military camp near Pagani village on Lesbos, where police officers sent to Lesbos are housed.

Other targeted locations included the sites earmarked for construction of additional facilities to house migrants on Lesbos and the port of Chios, through which police officers were transported from the continent.

Throughout the night, clashes left as many as 50 riot police officers and 10 protesters injured, according to local media.

Lesbos and its neighboring islands are a major entry point for refugees trying to reach Europe by crossing the Mediterranean. Over 74,000 new arrivals were registered last year, escalating an already serious overcrowding problem.

Also on rt.com Residents clash with police as Greek govt proceeds with construction of new migrant center in Lesbos (PHOTOS/VIDEOS)

Troublesome results from South Korea and China, showing some of the patients who recovered from…