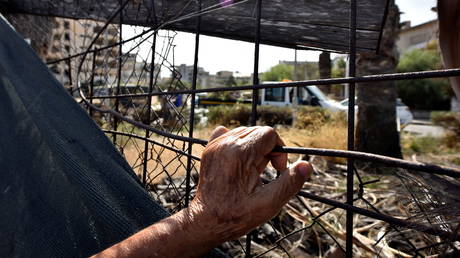 FILE PHOTO: A man holds a fence in an area fenced off by the Turkish military since 1974 in the abandoned coastal area of Varosha in Turkish-controlled northern Cyprus, October 8, 2020 © Reuters / Harun Ucar

The US has rejected Ankara’s demands for a separate Turkish state on the island of Cyprus, after Turkish Cypriot authorities announced plans to defy Greece and the UN by reopening the northern border town of Varosha.

Sitting on the border between Greek and Turkish-held Cyprus, Varosha has remained abandoned since Turkish forces invaded the island in 1974 to stave off a Greek Cypriot coup. Though inside Turkish territory on the island, Varosha has served as a buffer between that territory and the Greek sector of the island, which is recognized internationally as Cyprus.

After a visit to the island’s divided capital of Nicosia a day earlier, Turkish President Recep Tayyip Erdogan declared on Wednesday that his government would only accept a two-state deal. “Now, the only demand of the Turkish Cypriots in international negotiations is the recognition of the status of a sovereign state,” he declared. “All offers other than this have expired.” (RT)

Nowadays, professional courses on cyber security and data analysis have been launched in order to…