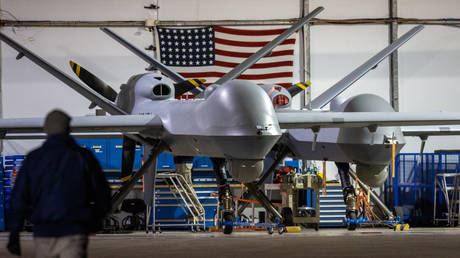 An MQ-9 Reaper drone employed by the US Border Patrol at Fort Huachuca, Arizona, is shown awaiting its next mission earlier this month. © Getty Images / John Moore

The Biden administration has announced its decision on a key weapons deal with Doha during the US-Iran World Cup match An MQ-9 Reaper drone employed by the US Border Patrol at Fort Huachuca, Arizona, is shown awaiting its next mission earlier this month. © Getty Images / John Moore

US President Joe Biden’s administration has approved a long-delayed weapons deal with Qatar, agreeing to supply the Middle East ally with $1 billion worth of unmanned aerial vehicles (UAVs).

The US State Department announced its go-ahead for the deal on Tuesday, just as the American and Iranian teams were starting the second half of their World Cup soccer match in Doha. The sale includes 10 advanced drone systems, 200 drone interceptors and related equipment.

Qatar made its request for a UAV purchase, including MQ-9 reaper drones, in 2020. Despite Doha’s close ties with Washington, including hosting the US Central Command’s forward headquarters and the Pentagon’s air operations center for the region at Al Udeid Air Base, US officials were slow to approve the deal. Even as Qatar hosted thousands of refugees and helped ease the chaotic US withdrawal from Afghanistan last year, Sheikh Tamim bin Hamad Al Thani’s government struggled to get clear answers from the Biden administration on what was holding up the UAV transaction. 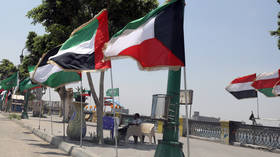 The Pentagon encouraged approval of the sale, citing Qatar’s reliability as a trusted partner, but State Department officials were concerned that other countries in the region, including Saudi Arabia and the United Arab Emirates, would be angered, according to media reports last year. Saudi Arabia, the UAE, Bahrain and Egypt cut off relations with Qatar in 2017, accusing the country of supporting terrorists.

The US had a falling-out with Saudi Arabia this year, after Riyadh allegedly reneged on a secret deal to boost oil supplies ahead of this month’s midterm congressional elections. Biden responded by pledging to re-evaluate the US-Saudi relationship, saying, “there will be consequences.”

The UAV sale will “support the foreign policy and national security objectives of the United States by helping to improve the security of a friendly country that continues to be an important force for political stability and economic progress in the Middle East,” the State Department said in a statement. It will “improve Qatar’s capability to meet current and future threats by providing electronic and kinetic defeat capabilities against unmanned aircraft systems.”

The US-supplied drones will help Qatar monitor its vast natural-gas infrastructure and prevent terrorist attacks. Doha had aimed to complete the purchase in time to beef up security for the World Cup. (RT)