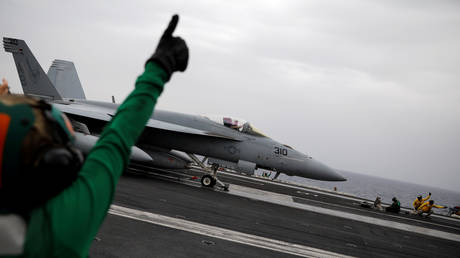 With tension between the US and Iran running sizzling hot, some fear President Donald Trump may see war as a potential boost for his re-election campaign. Ex-Senator Ron Paul told RT he is optimistic that Trump won’t.

The Trump administration is full of Iran hawks, with people like Secretary of State Mike Pompeo and National Security Advisor John Bolton having lengthy records of advocating military action against Tehran. There are fears that the president may greenlight a full-scale military conflict with Iran in the hope of rallying domestic support ahead of the 2020 election, especially since he accused his predecessor, Barack Obama, of having the same thoughts in 2013.

Ron Paul, a veteran libertarian politician, told RT’s Going Underground he doesn’t believe it would work in the first place, and that Trump likely knows it intuitively.

Also on rt.com Republicans & Democrats agree: No war on Iran (without Congress at least)

“Though I’ve had my criticisms of the president, I think his gut instincts are not for that. I think if there is a hot war going on between now and next [sic] November, he is going to have a lot tougher time winning the election,” he said.

Watch the entire interview below.